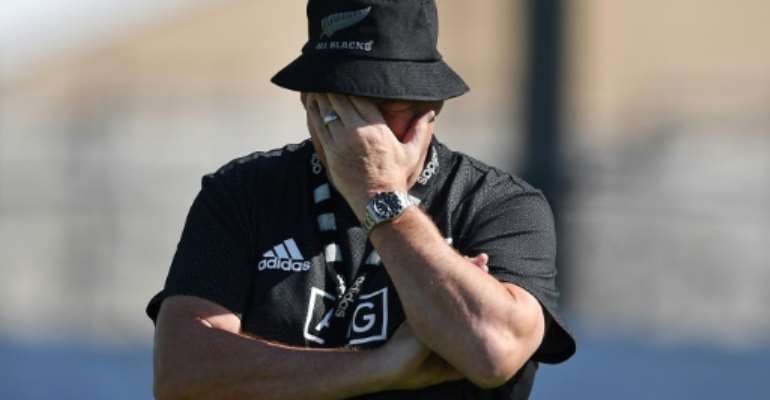 New Zealand's head coach Steve Hansen said his Springboks opposite number was trying to put pressure on the referee ahead of their Rugby World Cup clash. By CHARLY TRIBALLEAU (AFP)

All Blacks coach Steve Hansen warned South Africa's Rassie Erasmus to lay off referee Jerome Garces as the war of words escalated on Thursday ahead of their crunch World Cup Pool B clash.

Hansen accused Erasmus of "trying to put pressure on the referee" after the Springbok coach led what appeared to be an orchestrated South African campaign targeting the match official.

But Hansen said it wouldn't work, adding the referees "are not stupid people".

Erasmus claimed the All Blacks received special consideration and it was a "well known fact" that tight decisions often go their way, while his assistant coach Mzwandile Stick called for "equal treatment" from Garces.

Garces has refereed five Springboks-All Blacks Tests, with New Zealand winning each one including a narrow 20-18 victory in the 2015 World Cup semi-finals.

Presentation of the Rugby World Cup 2019 in Japan from September 20 to November 2. By Laurence SAUBADU (AFP)

"It's pretty obvious what they're trying to do and whilst I've got a lot of respect for South Africa and particularly Rassie, I think he's a great coach, I don't agree with what he's doing," Hansen said.

"He's trying to put pressure on the referee externally and they're under enough pressure already. They don't need us coaches to be doing what he's doing."

Garces is no favourite in New Zealand either, having been involved in red cards for two All Blacks in recent years, but Hansen said there was no choice other than to accept the rulings.

"It doesn't matter who's your ref, as a coach or a team you can always find things after the game that they didn't do," Hansen said.

"At the end of the day, they go out to do the very best they can do, and yes they don't get it right all the time and we've suffered from that just like other teams have.

"It's a big game, we just need to let the ref get on with it and prepare for it himself."

Scott Barrett, named to start at lock on Saturday in his first Test in six weeks since been red-carded by Garces against Australia, said he harboured no ill-feeling towards the referee.

"There's obviously a fine line and I've learned from that and am keen to move on," Barrett said.

"The laws are there for a reason to protect players and player welfare and I've been working hard and keen to address that.

"We've had the (referee's) briefing and we're well aware how they'll be reffing high shots and foul play."

W/R: Adiembra residents save 17-year-old student from kidnap...
58 minutes ago