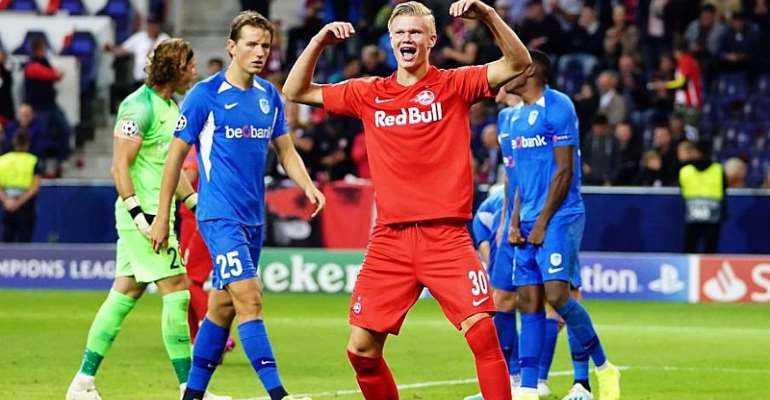 Salzburg striker Erling Braut Haaland became the third-youngest player to score a Champions League hat-trick as the Austrian champions romped to a stunning 6-2 win over Genk on Tuesday.

The 19-year-old took his incredible tally to 17 goals in nine appearances for Salzburg this season.

Only Real Madrid great Raul (18 years and 113 days) and former Manchester United striker Wayne Rooney (18 years and 340 days) have scored trebles in the Champions League while younger than Haaland (19 years and 58 days).

He is also the first player to score more than once on his Champions League debut since Rooney's hat-trick for United against Fenerbahce in 2004.

Haaland, the son of former Leeds and Manchester City defender Alf-Inge Haaland, has already made his senior Norway international debut and scored nine goals in an Under-20 World Cup match against Honduras in May.

Haaland slotted the hosts in front inside two minutes, before doubling his tally in the 34th minute after racing clean through on goal.

Hwang Hee-chan made it three shortly afterwards, and after Jhon Lucumi pulled one back for Genk, Haaland completed his hat-trick in the 45th minute.

There was still time in a crazy first half for 18-year-old Hungarian Dominik Szoboszlai to put Salzburg 5-1 ahead.

Mbawana Samata's header gave Genk a glimmer of hope just seven minutes into the second period, but Andreas Ulmer rounded off a memorable night for Salzburg.

The victory sends Salzburg to the top of the early Group E standings ahead of Napoli, who beat holders Liverpool 2-0 in Naples.