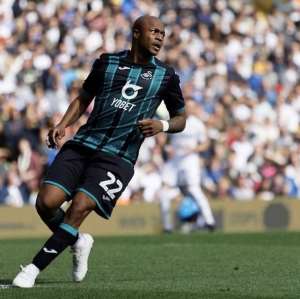 Wayne Routledge climbed off the bench to the only goal the Swans at Elland Road.

Routledge struck in the 90th minute to maintain Swansea's unbeaten start under Steve Cooper and inflict Leeds' first defeat of the season.

The Swans are now two points clear at the top of the table, while Leeds drop down to third, below Charlton.

The Ghana skipper was replaced by George Byers in the 85th minute.

Steve Copper will hope Ayew stay at the club as they fight for Premier League football.

The Swans will host Nottingham Forest next two weeks Saturday.