No Agreement Over Neymar Transfer - PSG 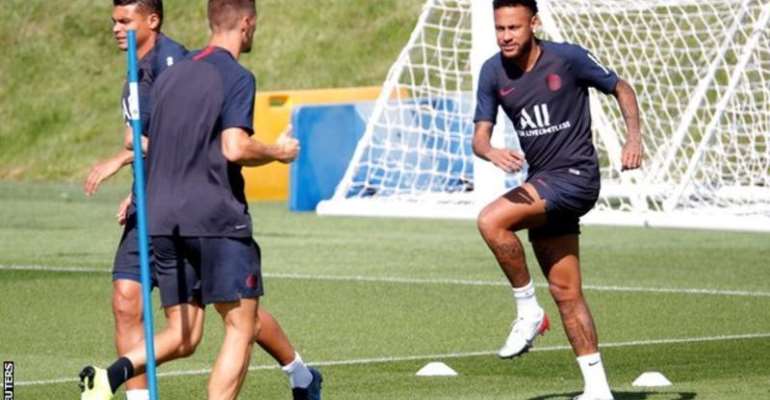 Paris St-Germain sporting director Leonardo has said "no agreement" is in place for the transfer of Neymar.

BBC Radio 5 Live had reported that officials from PSG and Barcelona met on Tuesday to discuss a possible deal for the 27-year-old Brazil forward.

Both parties value Neymar at 200m euros (£182m), with Barca having offered a cash-plus-player deal.

After Friday's 2-0 Ligue 1 win at Metz, Leonardo said PSG had refused an offer as "the conditions didn't suit us".

The La Liga transfer deadline is on Monday at 23:00 BST.

Neymar, who joined PSG from Barcelona in 2017 for a world record fee of 222m euros (£200m), is yet to play for the French club this season as he is recovering from an ankle injury he sustained playing for Brazil in June.

Barca have offered defender Jean-Clair Todibo and midfielder Ivan Rakitic, plus forward Ousmane Dembele on a season-long loan, but all three players have rejected the move.

Former Brazil international Leonardo said: "Our position on a potential departure of Neymar is clear, everyone knows what we want.

"We got a first written offer on 27 August and we refused it, the conditions didn't suit us.

"There are three days until the end of the transfer window, and for the moment, there is no agreement.

"We're talking a lot, with Neymar in particular. He's an extraordinary player, I didn't know him personally before I came back to Paris.

"He has gone through a lot of things, he's a football star today, and I like him a lot. We have a good relationship with him."