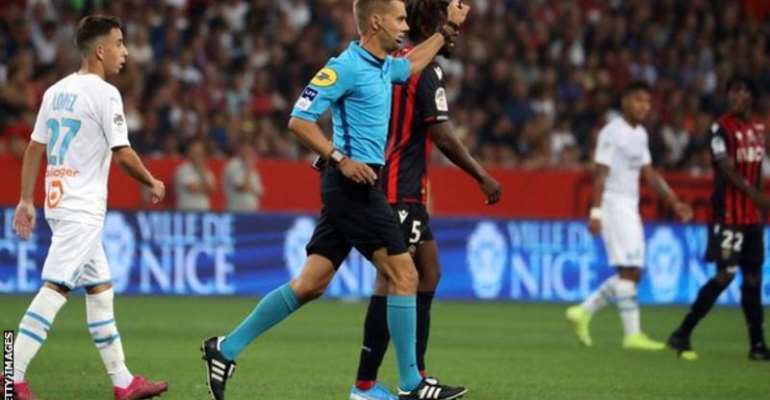 The Ligue 1 derby between Nice and Marseille was suspended on Wednesday following homophobic chants from a section of the fans.

Players from both teams were escorted from the pitch midway through the first half of the contest following repeated appeals to stop the chanting.

Referees in France have been instructed to stop matches if homophobic songs are heard.

"The referee was right to stop the match," Nice manager Patrick Vieira said.

"These are unacceptable things. The message was clear, and the referee had no choice. He might have given us a little more time to try to go to the supporters and ask them to remove the banner - but he explained things that I understand very well."

The former Arsenal and France midfielder added: "I hope that will not happen again, in Nice or [anywhere else]."

There were also reports of homophobic banners in the stands.

This was Nice's first game since they were bought by Ineos, the chemical company founded by British billionaire Sir Jim Ratcliffe.

Marlene Schiappa, France's gender equality minister, tweeted: "Congratulations to referee Clement Turpin, whose commitment to respect for football is known to have interrupted the match #OGCNOM #NiceOM, despite the fact that, despite several withdrawal requests, a homophobic banner dirtied the stands.

"Football is a matter of passion not hate."
It follows an incident on 16 August when the Ligue 2 fixture between Nancy and Le Mans was halted for a few minutes due to homophobic chanting by a section of fans.

On Sunday, a referee threatened to stop Monaco's 2-2 home draw with Nimes after away supporters insulted league organisers with offensive language.

No Gov’t In 4th Republic Has Matched Our 3years Achievements...
46 minutes ago