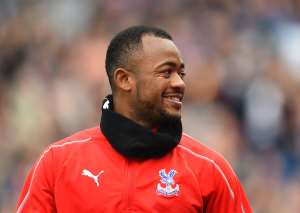 The Ghanaian forward score in the early minute of the at Old Trafford before Patrick Van Anholt sealed the in extra time to end Palace 39 years winless run against the two-times European champions.

The former England manager gave his forward a huge thumbs up and went further to explain the duties he gave Jordan Ayew on the day. He revealed his satisfaction at seeing that the player follow the instructions that helped them to get the victory.

“He [Ayew] was unlucky to lose his place when I wanted to play two front players and I chose Wilf to partner Christian Benteke rather than him.

"He would’ve been quite entitled to say ‘I played quite well against Everton’ but there was no doubt in my mind that I was going to bring him back for this game.

"And basically he had a very specific job to do, apart from of course being a good centre-forward, holding the ball up, beating players when he can and scoring goals; he had another very important job to do: making sure Paul Pogba couldn’t come deep and spread passes all around the play.”