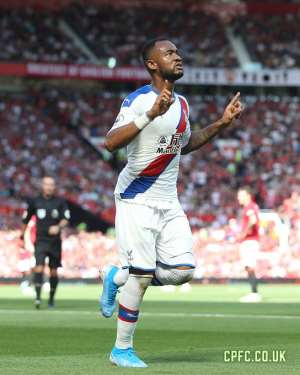 A first-half strike from Ghanaian international Jordan Ayew inspired Crystal Palace to a 2-1 victory over Manchester United at Old Trafford on match week 3 of the English Premier League on Saturday afternoon.

In a match that the Red Devils were fancied to win, they could not capitalize on their home advantage and had to succumb to a narrow defeat at the hands of a determined Roy Hodgson side that fought for their lives throughout 90 minutes.

The Manchester-based club started the match very well with the likes of Marcus Rashford and Daniel James failing to make good use of the goal-scoring opportunities they were presented.

The Eagles grew in confidence and took the lead on the 32nd minute through striker Jordan Ayew. The Black Stars forward latched onto a headed pass from fellow countryman Jeffrey Schlupp before calmly slotting his shot past the helpless David De Gea.

Ole Gunnar Solskjær’s men went into the break on the losing side but resumed the second half with much purpose. They were awarded a penalty on the 70th minute but unfortunately squandered the glorious opportunity after Rashford’s shot hit the left post.

New boy Daniel James pulled parity for his side on the 89th minute only for Patrick van Aanholt to score in added time to hand the Eagles an emotional win.

Kill All Galamsey Operators Before They Kill Us By Destroyin...
15 minutes ago