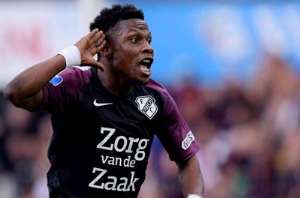 Ghanaian prodigy, Abass Issah scored an audacious for FC Utrecht in their 1-1 draw at Feyenoord on Sunday in the Eredivisie.

The former Asokwa Deportivo star intercepted a pass inside the FC Utrecht half and raced into the Feyenoord half, danced his way past a defender before lashing home a low shot past the onrushing goalie.

The 20-year-old who is on loan from German side Mainz 05 in an interview to score more goals for Dutch side after the game ended 1-1.

"Let say it's just a goal and I think I'm going to score more," the former Ghana U-17 forward said. "My dream is to score more and help the club," he added.

He has made three appearances for Utrecht this season, recording a goal and an assist each.

A former Ghana U-17 internationsal, Abass Issah moved to Slovenian side Olimpija Ljubljana from Deportivo in 2017.