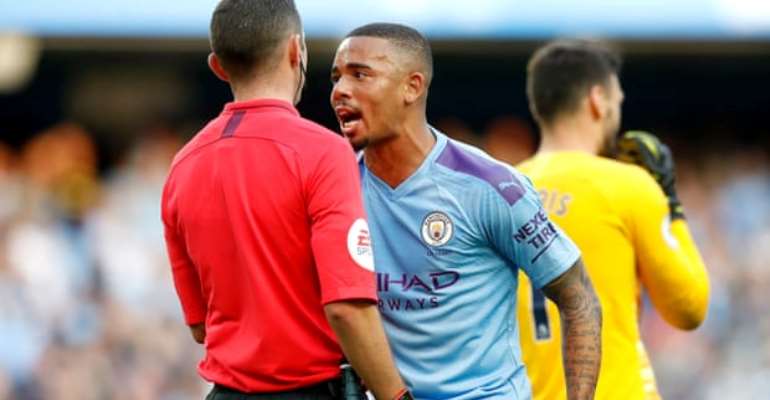 The following are talking points from the weekend's Premier League action:

VAR AND THE LAW OF UNINTENDED CONSEQUENCES
Ultimately, whether you are in favour or against the VAR system, it is a philosophical question.

Do you think the search for a perfect, fair, error-free football is desirable and, if so, is it feasible?

Or, do you think sport, like life itself, is full of imperfections and unfairness and that a sporting contest should not arbitrated by faceless officials sat in a room miles away from the stadium?

But whatever side of that debate you sit on, it is clear that VAR is impacting the game in many ways that were not all anticipated, proving the 'law of unintended consequences'.

The forensic video scrutiny leads to goals, such as Gabriel Jesus's late winner against Spurs for Manchester City on Saturday being ruled out despite none of the Spurs players noticing, let alone appealing for, the offence.

That goal was disallowed under the new handball law, which, in keeping with the VAR era and the desire for clear 'black and white' decisions, removes evaluation of intent from the offence.

The offence of handball was not created to deal with accidental brushes of the ball against a player's arm, just as the offside law was not designed to stop 50,000 people celebrating a goal because an attacking armpit may have been a centimetre ahead of a defending groin.

VAR does, however, seem to fit into the televised experience of football -- with replays, instant punditry and constant scrutiny for the fan armed with a remote control with pause and rewind.

But in a stadium, when result-changing decisions are made by men sat in an office near Heathrow airport, often with no evidence presented to fans, it feels like a cold, alien, intrusion into the passion and spontaneity of the game.

Chelsea were the first club in England to invest massive amounts of money in creating a team largely made up of imported talent -- and the result was a stack of trophies.

At times they were a club that neutrals could admire -- who couldn't enjoy watching Gianfranco Zola or Gianluca Vialli, Claude Makelele or Eden Hazard?

But as time has gone on, with the high turnover of managers and a dressing room that has appeared to switch on and off according to their mood, Chelsea's appeal beyond their own fans has faded.

Frank Lampard has yet to get a win as manager but in his first three matches -- Sunday's Premier League draw with Leicester, the midweek penalty shoot-out defeat to Liverpool in the UEFA Super Cup and even the 4-0 defeat at Old Trafford, there have been signs of a new Chelsea.

There are exciting younger players - home-grown such as Mason Mount and imported such as American winger Christian Pulisic. There are also some early signs of the kind of high-tempo, dynamic football that Lampard wants.

Chelsea fans will give him time -- his history with the club and the knowledge that they are serving a transfer ban, should save him from the usual early over-reactions, but he has already gone a long way to restoring the club's image.

CONTINENTAL GAP ON TRANSFERS MAKES NO SENSE
Spurs manager Mauricio Pochettino has admitted it is worrying that although the Premier League transfer window has closed, European clubs could still come in and sign players such as Christian Eriksen.

That would leave the Argentine unable to reinvest any revenue from a sale in replacements and it is hard not to wonder how we ended up in this situation?

The aim of the change was to sync the end of the window with the start of the season but it really makes little sense for England not to be in line with the rest of Europe on this issue.

PUKKI POWER
There wasn't much in Teemu Pukki's resume that suggested he would be a goalscoring sensation in English football but credit to Norwich's recruitment team for pulling off a real deal.

After hitting 29 goals in the promotion campaign last season, he hit a hat-trick in Saturday's 3-1 win over Newcastle United to take his Premier League tally to four goals in two games.

Not bad for a 29-year-old free transfer from Brondby.

CEBALLOS SHINES
While many of the new arrivals in the league are still adjusting, gradually being eased into their new teams, Spanish midfielder Dani Ceballos has made an instant impact. He ran the Arsenal midfield on Saturday with such authority, confidence and skill, that it was hard to believe it was his first start in the league.

JHS Not Increased To Four Years Or Reduced SHS Duration – Na...
8 minutes ago

We've Been Begging To Survive Over Closure Of Our Shops – N...
8 minutes ago