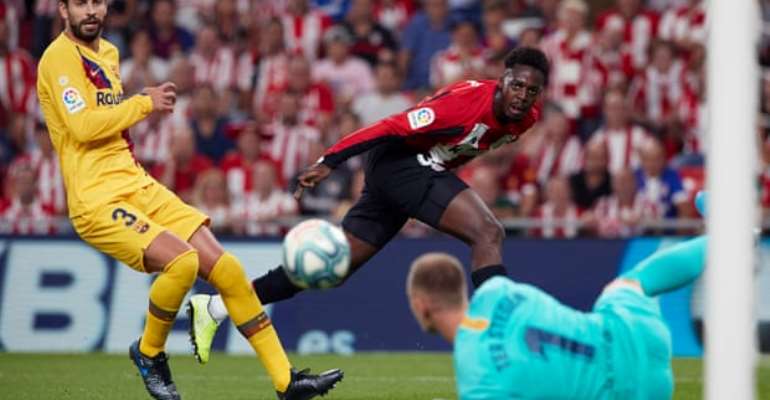 Ghanaian forward, Iñaki Williams produced a stunning performance against FC Barcelona helping his side to beat the La Liga champions by a lone goal.

A stunning late goal from veteran striker Aritz Aduriz in the 89th-minute secured a 1-0 win for Athletic Bilbao in Friday's La Liga opener.

Barcelona had hit the woodwork twice in the first half but were below-par in general and also lost Luis Suarez to injury as their latest title defence got off to a miserable start.

Athletic, meanwhile, have beaten Barcelona at home for the first time since 2013 as their own campaign began in dream fashion.

The Spanish born was heavily linked to Manchester United in the summer transfer window as a replacement for Romelu Lukaku who joined Inter Milan.

However, the La Liga side extended the contract of the young attacker for nine years.

Williams came close in breaking the deadlock of the game in the 16th minute of the game.

The 23-year-old was replaced by Aritz Aduriz at the 87th minute of the game.

Athletic Bilbao will play away to Getafe on Saturday, August 24.

‘50% + 1’ To Pick President Is Constitutional Misrepresentat...
22 minutes ago