Solomon Asante Nominated For USL Player Of The Year Award 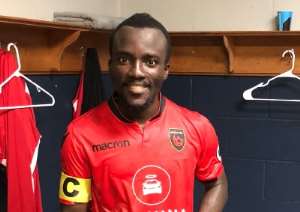 Experience Ghanaian attacker, Solomon Asante has been nominated for the ‘Player of the Year’ (MVP) award in the United Soccer League (USL) following his outstanding performance with Phoenix Rising FC in the ongoing season.

The ex-Black Stars and TP Mazembe forward has been the standout player for his USL side in the current campaign and to a large extent the league as a whole.

His excellent performance was instrumental during Phoenix Rising FC’s 12-game winning streak which has leapfrogged them above the top teams to the top of the league standings.

Asante, 29, has shown consistency week after week and is currently leading the race for the golden boot with a total of 15 goals tied together with Nashville SC’s Daniel Ríos.

That statistic together with the fact that the Ghanaian is leading the chart of the player with the most assist has made him a strong contender for the top-most award which will be given out at the end of the regular season.

Numbers in the USL has also shown that Solomon Asante has better accuracy with his shooting, placing 62 percent of his efforts on target compared to Rios’ 44 percent.

The Captain of Phoenix Rising looks like there is nothing stopping him this season and might just go all the way to pick up the MVP award at the end of the season.

Another player in the race for the top award is New Mexico United’s Kevaughn Frater.