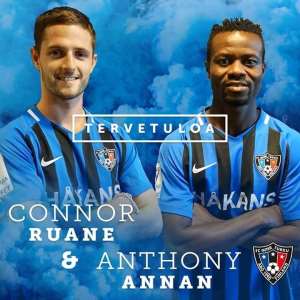 The experienced midfielder has been in talks with the club in the past week and has now completed the transfer after agreeing to terms and passing a mandatory medical examination.

Anthony Annan, 33, joins the Blue and Black lads on a year deal in hopes of helping the club challenge the big clubs in Finland for the league title at the end of the 2019/2020 season.

This will be his second stint in the Finish League having previously played for HJK Helsinki.

During the early days of Annan’s career, he made 67 appearances for Ghana and managed to score two times.

The player was unveilled together with Englishman Conor Ruane and will be hoping to have a good season at the end of it all.