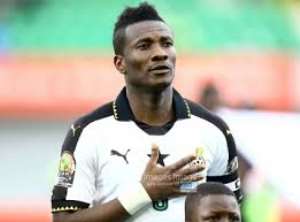 General Captain for the Black Stars, Asamoah Gyan has confirmed his readiness and availability to play for Ghana during the qualifiers of the 2021 Africa Cup of Nations (AFCON) tournament.

His decision is coming on the back of the disappointing performance of the Stars at the 2019 AFCON which was staged in Egypt. Booming with confidence to lift the trophy, the team only managed to make the round 16 stage where they were shockingly knocked out by the Carthage Eagles of Tunisia.

With age currently not on his side, Asamoah Gyan’s playing time was limited in the past tournament which has pushed several people to believe it is time for him to hang his boots at the international level to allow the young strikers to take over.

Speaking in an interview with Asempa FM on Friday morning, Asamoah Gyan has indicated that he still has oil in his engine and is ready for a call-up to feature for the side in the upcoming qualifiers.

“As at now I’m still ready for a call up to the national team”, the 33-year-old striker said.

Meanwhile, the former Sunderland FC forward has expressed confidence in the young players that represented Ghana at the AFCON and insists they can achieve something for the country in the future.

“The Black Stars have a future with this crop of players, I don’t doubt the qualities of any player”, Gyan said.