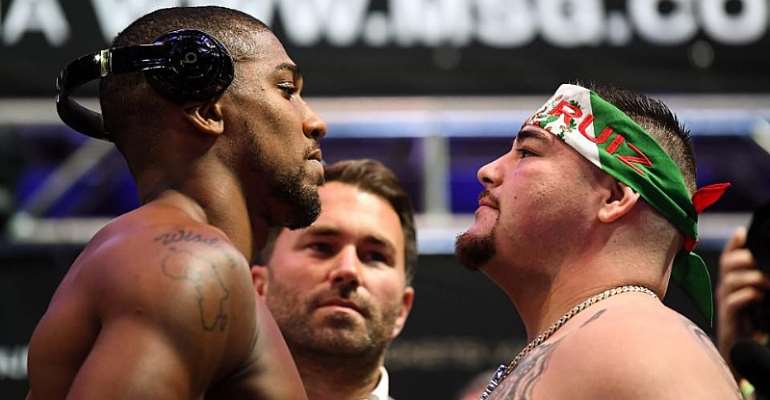 Ahead of his rematch with heavyweight champion Andy Ruiz Jr, Anthony Joshua says he is focused on regaining his passion for boxing.

Anthony Joshua wants to rediscover his passion for boxing as he prepares for his rematch with heavyweight champion Andy Ruiz Jr.

Ruiz caused a major upset when he defeated Joshua – making his debut in the United States – by technical knockout in the seventh round of the June 1 fight to claim the WBA, IBF and WBO titles.

A rematch is likely to take place in November or December, though a venue is yet to be decided.

Joshua’s choice is Cardiff’s Principality Stadium, but Ruiz has refused to fight in the UK and a neutral venue is expected to be confirmed.

However, Joshua insists he is paying little attention to the negotiations and is solely focused on regaining his titles.

“I need to soak in the boxing environment again, get that passion back,” Joshua told Sky Sports. “The only fighter I’m interested in right now is Ruiz and beating him good so I can get those belts back.

“The only guys I should be fighting are the best in the world. I feel like I can correct my wrongs. I’ve come from a tough background and I know Ruiz beating me is something I can overcome.

“I see a lot of talking about what Ruiz wants. I don’t mind fighting in America, I’ve done it before.

“And I’d love to fight him [in the UK] because I went [to America] off my own back. So I’d love it to be in Cardiff. However, it’s going to be on neutral ground. I’ll battle for it to be in the UK. It’s my stomping ground.

“The British fans that have been riding with me from day one want to see me get those belts back. To walk out in Cardiff in front of 70,000 or 80,000 people screaming for you to win. The energy running through your body is incredible, and it might give me the little bit of edge I need to win those belts.

Joshua has elected not to have a warm-up fight, a decision he has no doubt is the right one.

“Anyone who tries to tell me different isn’t cut from the same cloth,” the 29-year-old said.

“Who’s my warm-up fight going to be? I don’t fight B-class heavyweights, I fight the best in the world. Ruiz has got what I want, so let’s get it on.