Yarkor Chavez Annan, Ghana’s First Lady In Boxing Not Given Up 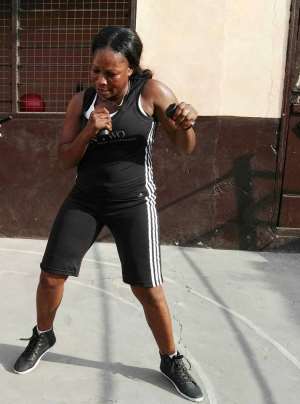 Yarkor Chavez Annan is the first lady of Ghana Boxing without any doubt as she still practices her talent at a ripe age.

She holds International Boxing ID# 373385 and has travelled far and near to box to make ends meet, but she is not happy that her hearts desire in the sport of boxing has not been met.

Born and bred at Bukom in Accra, and growing up with boxers like Alfred ‘Cobra’ Kotey, Ike ‘Bazooka’ Quartey and James Armah aka Bukom Fire she thought she could blaze the trail and succeed like her male counterparts, yet it has not been so just because some sports administrators would not allow her to box because she was female.

For many years she trained without getting fights and the few engagements were very had to crack because she always met better prepared and heavier opponents, and because the programme has been set she has to fight.

In all her loses outside Ghana, that was what happened.

Yarkor Chavez has had the opportunity to fight for five world titles, but all were published on the quite because some people instructed her what to do negatively and at times cheated her financially so did not enjoy the purses she fought for.

Chavez who took her name from the legendary Mexican boxers had fought in Accram Togo, Benin, Nigeria, London, Germany, Russia, Australia but laments that there is nothing to show in terms of wealth.

After all there near misses, the boxer who first climbed the ring on 2002-06-30 against a Nigerian, Yarbor Indidi in her international debut says she is not quitting until she wins something.

She is never happy also with the media in Ghana, because she feels they concentrate too much on football and if some pages and airtime was given to boxing, things could be better.

In leaving a legacy, she has decided to teach others what she knows and can do best.

With the realization that females can box in the amateur ranks and international games like the Commonwealth and Olympic Games, she now trains a few female boxers at The Gym in Accra Central.

“There are females who love to box like me, and I will train them to become champions. What I could not become as a female world champ, I believe I can impart on someone to achieve” she said.

She moved from London to stay in Ghana after encountering problems with her so-called managers and promoters who cheated her because she could not read and write well.

“Even my fight record is not accurate at BoxRec, because I have fought 26 times and lost 7, drew 4 and won 15. I carry the flag of female boxing for Ghana and other young girls are looking up to me” she expressed.

She acknowledges that education is very important and advises all sportspeople to take their schooling serious.

She knows she can not box forever, so she learnt hairdressing, manicure and pedicure, but has not established in that business and wants support to get her own shop to operate her beautician trade after boxing.

She always mentions the name of one Alhaji Inusah as someone who has been benevolent and met her needs in trying times.

“I feel let down by my nation because the authorities discouraged me, but once there is life, there is hope,” she said.

Last year, Women In Sports Association (WISA) honoured her but believes it should have been done by the Sports Writers Association of Ghana (SWAG), so she is still waiting for her dedication and devotion to sports to be recognised.