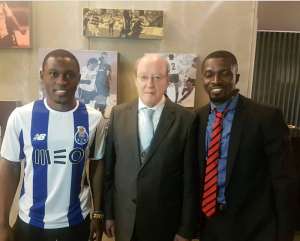 Yusif Chibsah, the representative of Ghanaian forward, Majeed Waris, has indicated that FC Porto’s decision to set a price tag of €6 Million on the player is driving interested clubs away.

Ahead of the new season, it is still unclear where Majeed Warris is going to end up especially when there has been no confirmation from his Portuguese club on whether he is part of their plans or not.

Reports indicate that he currently trains with Porto’s team B amidst strong interest from French Ligue 1 side FC Nantes.

The club is reportedly eager to sign the player on a permanent basis after impressing during his spell last season. What has been a standing block between the move is the €6 Million placed on Majeed Warris.

Speaking in an interview with ghanasoccernet.com, the agent of the striker Yussif Chibsah has shared frustration over the current situation of the player.

“Majeed is training with team B. He has a contract until 2022, so another three years, and we are trying to figure out what the club wants to do with him”.

“FC Porto only releases him for six million euros. I am trying to unblock the situation, it is not easy. He had a good time in France, but that amount is driving many people away”, the agent said.