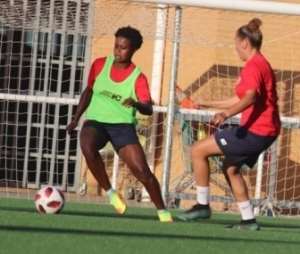 Black Queens striker, Princella Adubea has expressed her delight after partaking in her first training session after joining Sporting Club De Huelva on a two-year deal.

The Ampem Darkoa Ladies forward left Ghana for Spain on Wednesday to sign the two-year deal and join the pre-season training of the club.

On Friday, she posted photos of her at training on her Instagram account with the caption “Nyame ne hene”, which literally means "God is King".

In April, she was declared fit to return to active football after nursing an injury for 14 months.

She missed the U-20 Women’s World Cup in France in August 2018 due to the injury.

She was an integral part of the team during the qualifiers netting 10 goals for the Black Princesses to become the joint top scorer of the U-20 Women's World Cup qualifiers but her dreams of dazzling at the world stage were cut short due to the injury.

She is the first Ghanaian female player to join a club in Spain, though there are a number of female footballers are playing elsewhere in Europe.