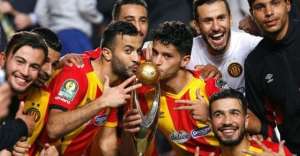 After The Court of Arbitration for Sports (CAS) declared Tunisian side Esperance of Tunis as the 2019 CAF Champions League winners following a hearing on the results of the controversial Champions League Final that ended ended prematurely in May, the Confederation of African Football, CAF has reacted, stating that “the competent bodies will meet shortly to decide on the case”.

In reference to the appeals filed by Wydad Athletic Club of Morocco and Espérance Sportive de Tunis of Tunisia against the decision of the CAF Executive Committee taken on 5 June 2019, ordering the replay of the second leg of the Total CAF Champions League 2018/19 final, the Court of Arbitration for Sport (CAS) on 31 July 2019 issued a partial decision.

The CAS Panel annulled the decision of the CAF Executive Committee only for procedural reasons. However, CAF has yet to receive the summarized decision.

The CAS Panel has decided to refer the case to the competent CAF bodies to apply the appropriate disciplinary sanctions, if any, and accordingly decide whether the second leg of the Total CAF Champions League 2018/19 season shall be replayed or not.

In this regard, CAF announces that the competent bodies will meet shortly to decide on the case and details will be communicated in due course.

It is still to be known which decision will be taken by CAF in the days ahead, but as things stand, Esperance of Tunis retained their title, as per CAS ruling.