Bukom Fist Of Fury Gets Booster From GOIL 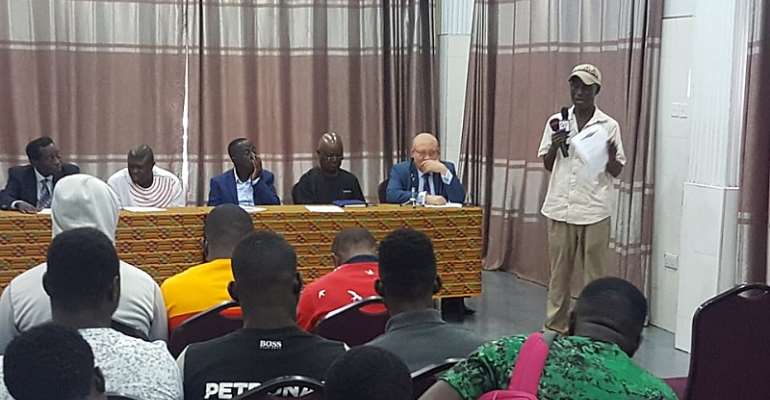 The exciting Bukom Fist of Fury Boxing League being organized by the Ghana Boxing Authority (GBA) and Ghana Amateur Boxing Federation (GBF) has received a financial boost of GH¢20,000 from GOIL ahead of its semi-final clashes tomorrow at Osu 5 Junction.

At a Media Briefing yesterday at M J Grand Hotel, Mr. Kwame Osei-Prempeh, Managing Director of GOIL, said the wholly-owned Ghanaian company is committed to supporting boxing to win laurels for the country.

Besides the financial support for the organisers of the popular programme, winners of both the amateur and professional fights will take home cash prizes at the finale of the competition scheduled for August 3.

“We would not only pay the topmost price but also support the champion to become a world-class boxer and win titles for the country.

With Prof. Azumah Nelson as our brand ambassador, we have already declared our interest in the development of boxing in the country and would continue to grant our assistance to the ongoing boxing league. Boxers must stay away from drinking and womanising but rather train and remain disciplined in order to excel,” he expressed.

The convenor of Bukom Fist of Fury, Moses Foh Amoaning, said, “If football fails, we could always rely on boxing to cheer us up as boxers continue to win titles for the country.”

The former GBA president who is now Technical Consultant to the boxing sanctioning body conveyed an immense gratitude to GOIL for coming on board to support boxing.

Mr. Foh Amoaning, a lawyer and marketer called for government’s support to help raise quality boxers that would continue to make the nation proud.

The pairings announced by matchmaker Believer will see Derick Mensah battling Mohammed Aryeetey in the 49kg in one of the semi-final bouts, while Michael Abban fights Moses Agyei in the 52kg.

In other bouts, Enoch Tetteh clashes with Emmanuel Sackey in the 60kg, while in a 64kg encounter, John Amebele will box Felix Nunoo for fame and glory.

The second semi-final bouts is fixed for July 26, with the grand finale of the Bukom Fist of Fury fixtures scheduled for August 3, which will witness amazing juvenile, sensational amateur and fantastic professional fights.

George Lamptey, president of the GBF also thanked Goil for their support and called on other companies to motivate and encourage the amateur boxers who are going to represent Ghana at international games.

Aside Goil, other sponsors of the Bukom Fist of Fury League and Professional Championship are GNPC, M J Grand Hotel and Max TV in collaboration with Star-Times.