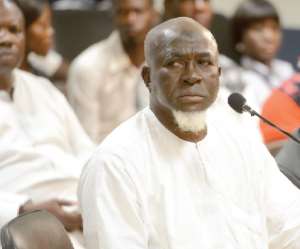 President of King Faisal Football Club, Alhaji Grusah has called on the government to as a matter of urgency reshuffle the Minister for Youth, Sports, and Culture, the Honorable Isaac Kwame Asiamah to a different sector following the Black Stars disappointing exit from the Africa Cup of Nations (AFCON) tournament.

Ghana failed in shocking circumstances at this year’s continental showdown which is currently ongoing in Egypt. The team after sailing through the storms to progress from Group F as leaders were knocked out at the round of 16 stage by Tunisia.

Speaking to Kumasi-based Oyerepa FM earlier today on the team’s performance, Alhaji Grusah has accused the Sports Minister of misleading President Akufo-Addo to commit too many resources to the national team’s AFCON campaign which in turn has yielded no result.

According to him, the government must do a reshuffle and send Isaac Asiamah to a different sector as soon as possible for what he terms as failing woefully.

“Hon Isaac Kwame Asiamah lied to the president of Ghana Nana Addo Dankwah Akufo Addo, the reason he committed so many resources to the AFCON campaign”, the bankroller of King Faisal said.

He added, “Hon Isaac Kwame Asiamah should be reshuffled to another ministry, he has failed woefully”.

Meanwhile, Hon. Isaac Asiamah is expected to appear in front of the Parliamentary Select Committee on Sports, Youth, and Culture in the coming weeks to disclose and defend the budget of the Black Stars for this year’s tournament.