NPC Executives Adviced To Be Committed, Caring And Creative 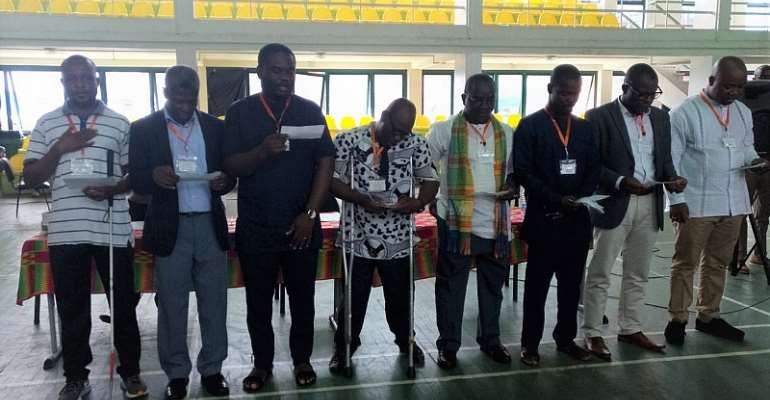 Madam Ester Akua Gyamfi, a legal practitioner who supervised the 2019 elective congress of the National Paralympic Committee (NPC) has cautioned the new executive against personal egos that can bring down the sports associations.

Speaking to delegates, observers and the media at the congress after a misunderstanding between the electoral commission officer conducting the process and the delegates on an added ballot paper to the presidential candidates to tally at 14 instead on 13, she calmed tempers and ensured that the issue was solved amicably and the winner was declared free and fairly.

He promised to unite the front of para-sports in Ghana and operate a transparent administration for every member to benefit.

He called on the government, companies and individuals to support the disables athletes because they often win medals for the nation at international competitions.

He expressed that the para powerlifting team went to a competition in Nigeria and brought home three medals.

Samson Deen who is also the CEO of African Origin Travel & Tours said Ghana would be participating in the 12th African Games in Rabat, Morocco in August as well as the 2020 Tokyo Olympic Games, and hoped that they are poised to win medals.

Losing presidential candidate, Shaaban Mohammed said once the electorate have decided, he has accepted the results in good faith and will support the new executive.

The new vice president, Fred Lartey urged all the delegates to bury their differences and come together to support the new executive.