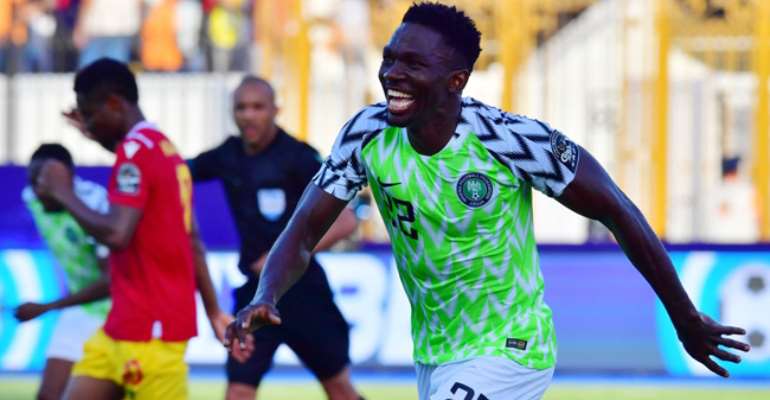 Nigeria became the first team to qualify for the last 16 of the Africa Cup of Nations following a 1-0 victory over Guinea in Alexandria.

Former Chelsea defender Kenneth Omeruo scored the only goal for the three-time African champions in the 73rd minute.

They now have six points from their two games after a 1-0 win over Burundi in their first match on Saturday.

The Elephants forced Nigeria goalkeeper, Akpeyi to a save after a strike from Cisse in the early stages of the match.

Nigeria afterwards dominated possession and had it not been for the poor touch of striker, Odion Ighalo who received a low cross from Ahmed Musa in the 18-yard box, the Super Eagles would have been ahead in the first ten minutes.

Guinea focused on shooting from distance and succeeded in testing the Nigeria goalkeeper on a couple of occasions but the scoreline remained goalless.

Gernot Rohr’s charges kept on probing and it was Ola Aina, who threatened to score with a shot at the near post but was saved by the goalkeeper, Kone.

Nigeria subsequently got a chance to be in the lead through their top scorer in the qualifiers, Ighalo but the striker’s low shot was off target.

Iwobi nine minutes from the break forced a save from Kone in goal for Guinea with a low drive from outside the box.

Nigeria failed to score the opener despite several attempts as the first half drew to a close.

It was the same story in the second half as Nigeria dominated.

Ahmed Musa caused problems to the defence of the Elephants with his pace and trickery but was unable to get his side in the lead.

Iwobi came close again with a curler at the edge of the penalty box but Kone was there to make a save.

The Super Eagles finally got the breakthrough with 16 minutes to end proceedings when Moses Simon's right-wing corner was headed in at the near post by Kenneth Omeruo.

The goal seemed to be a wakeup call for Guinea as the Elephants committed more men forward in search for an equalizer but to no avail.

Nigeria top Group B standings with six points with Guinea at the bottom, Burundi and Madagascar will face each other on Thursday afternoon.