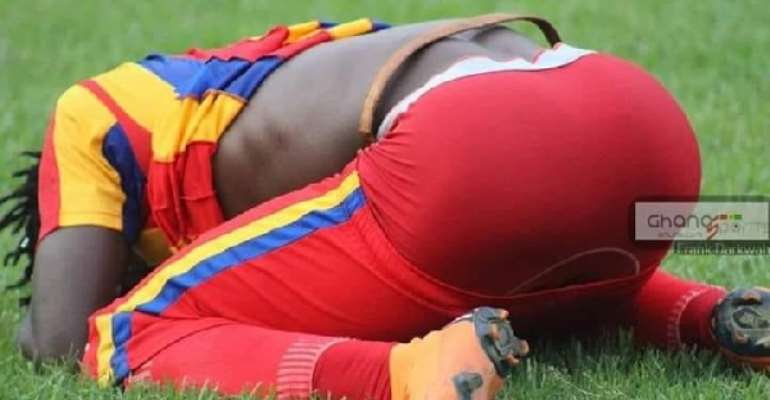 RazzNews.com can categorically state that Superstitions are extremely common in sport, especially football.

From the greatest in the sport to the gobs others hoping to become, weird practices before, during or after the game are implemented.

Ironically, the NC Special Competition Semi-final match which was played at the Accra Sports Stadium on Sunday, June 16,2019 between Accra Hearts Of Oak and rivals Asante Kotoko was no exception.

The match, which was to determine Ghana’s representative for next year’s CAF Champions League, saw Hearts of Oak striker Aboubakar Traore exposed for using black magic 'juju' during the match.

Traore, who had replaced captain Fatawu Mohammed in the second half when his side were trailing 1-0, earned Hearts a penalty in injury time after his pass inside the box hit the hand of a Kotoko player.

The penalty was converted by Christopher Bonney for a deserved equalizer to send the match into penalty shootouts-- which the Porcupine Warriors won 5-4., sending them to the final.

Traore, who scored Hearts of Oak's fourth kick, was exposed when he buried his head in the turf after Kotoko's Captain, Amos Frimpong had scored the winning penalty.

It was clearly captured in his prostration that he had the amulet belt tied around his waist, expected to help him during the match.

Ever since Traore's picture surfaced online, social media, most Christians have chastised the Burkinabe for wearing the amulet belt.

Yes,it is spiritual,mostly for protection,but it's extremely unfortunate for anyone to defend the Hearts striker and the Burkinabe, because just as we all have our beliefs, like the way Christians wear Rosary and Muslims also put tasbaa around their necks, wearing an amulet belt is the norm of young men from the Moshe background in African countries like Guinea,Niger,Benin and Mali.

To cement my argument, anyone who thinks only African footballers concentrate more on persuading supernatural powers to help them out during matches rather than putting their hard work on the field, must be joking.

In a desperate attempt to help his team get back to winning ways, Barry Fry, during his days as the Birmingham City manager, admitted to urinating in the 4 corners of the field.

The semi-final match of this year's Europa League between Chelsea and Frankfurt, also generated another superstitious belief during the penalty shootouts as Chelsea's coach Maurizio Sarri refrained himself from praying with the team before the shootouts--which Chelsea ended up winning.

There have also been instances of players/staff relying on the Almighty to help them/team perform to expectations.