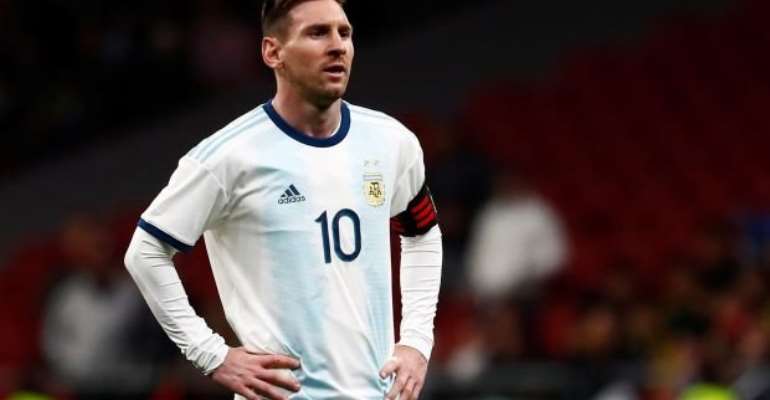 Argentina defender Tagliafico has praised captain Lionel Messi for his desire to win a trophy for his country as they begin their quest to end a 26-year wait for silverware with their Copa America opener against Colombia on Saturday.

Messi took time out after their limp 2018 World Cup campaign ended with defeat by eventual champions France but the Barcelona forward returned to the team earlier this year to prepare for the Copa -- the last trophy Argentina won, in 1993.

Messi, now 31, also quit the national team after losing the 2016 Copa America final to Chile, a fourth successive defeat in a major final for Argentina after agonising losses in the 2007 and 2015 Copa finals and the 2014 World Cup showpiece.

"I am lucky enough to have been in the same team as Messi before and his desire is what impresses me the most," Tagliafico told a news conference ahead of the Group B game at the Fonte Nova Arena in Salvador.

"He keeps wanting to come back and keep trying, it's incredible. He is the same as he was at the World Cup, he is calm, relaxed and has the same desire as ever."

Coach Lionel Scaloni echoed the defender's description of Argentina's all-time top scorer Messi, who has been unable to replicate his achievements with Barcelona for his country.

"We are impressed by his enthusiasm and the fact he is here sharing that desire to win with us makes us enormously happy."

The midfield will be formed by the relatively inexperienced trio of Giovani Lo Celso, Leandro Paredes and Guido Rodriguez, while Tagliafico will be joined in defence by Nicolas Otamendi, German Pezzella and Renzo Saravia, with Franco Armani in goal.

Third-choice goalkeeper Esteban Andrada has been withdrawn from the squad after suffering a knee injury on Thursday and replaced by Udinese's Juan Musso.

Scaloni has been in temporary charge since the World Cup and has expressed a desire to stay in the job after the Copa America, but said he would not be judged for his results alone.

"The most important thing is not just the results but how you get them, it's important that the fans can identify themselves with the team and like the way we play," he added.