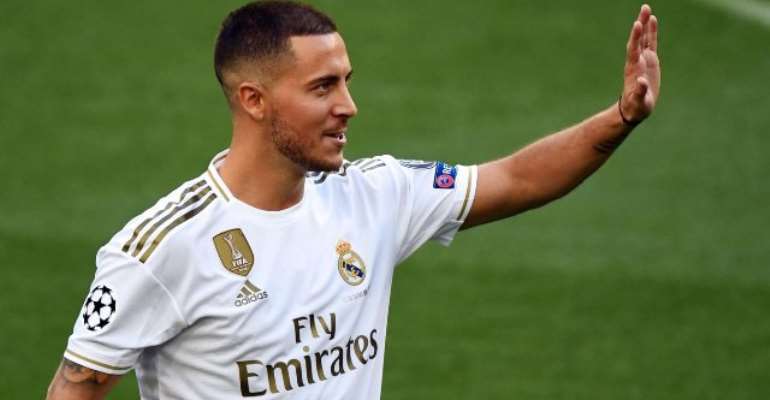 Eden Hazard was presented to Real Madrid fans at the Bernabeu on Thursday evening, where he declared his intention to win “many titles” at the club after joining from Chelsea.

The Belgian completed his long-awaited move to Real last week, signing for £88m plus add-ons in a five-year deal.

The 28-year-old underwent a medical earlier on Thursday and took to the Bernabeu pitch before addressing the media.

As has become tradition for new Real signings, most notoriously David Beckham and Cristiano Ronaldo, Hazard performed keepy-uppies for the crowd.

The Bernabeu stadium was filled with a reported 55,000 spectators, and a kiss on the Real badge from Hazard drew a huge cheer from those who attended.

“I will speak in French as my Spanish is not yet good enough," he said. “Thank you, Mr President and thanks to my family.

"I want to win many titles with Real Madrid, in this shirt. This has been my dream since I was a child and now I'm here. I just want to enjoy this moment.

“I just want to enjoy this moment. Thank you very much.”

Hazard then spoke of his ambitions to become the best player in the world, stating the move to Real would hopefully help him towards claiming the Ballon d'Or:

" I'm going to try to become the best player in the world, but first I wanted to be in the best team in the world."

I plan to enjoy myself here, because at Real Madrid you have to win as much as possible. Hopefully, I can write another page in the history of the club."

He added that he could not wait to play under Zinedine Zidane, who returned to the helm for a second spell at Real earlier this year.

"Everyone knows Zidane has been my idol since I was a child, and him being the Madrid boss was an important factor for me coming here."

Club president Florentino Perez added: "Eden, now you are where you wanted to be. Today one of the great dreams of your life comes true.

"You are a Real Madrid player and are part of this club to defend the shirt. The Bernabeu is your home. Here you will feel the passion and emotion of those who want to enjoy your talent and creativity.

"The fans will be with you in every match...they know your football is special. Welcome to Real Madrid, welcome to your home."

Hazard signed off his Chelsea career with a double in their Europa League final win over Arsenal in May.

His season has only just finished, however, having been on international duty with Belgium, but Real fans will hope to see him in action next month.