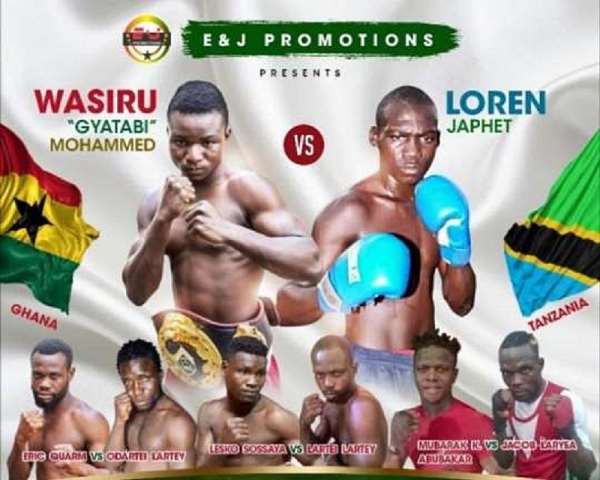 E&J Boxing Promotions, co-owned by Ellis Kwame Quashigah and John Owiredu Manfo who are really working hard as boxing promoters to give boxing fans something to cheer about and also produce great champions for Ghana have come up with a new date for Wasiru Mohammed against Loren Japhet of Tanzania.

According to Ellis Quashigah, they want to create huge publicity for Wasiru Mohammed aka ‘Gyata Bi’ who is now the focus of Ghana boxing.

The manager said publicity for Saturday’s bill has not gone down well as they expected, so the bout has been shifted to from June 15 to June 29 at the Accra Sports Stadium.

The World Boxing Organisation (WBO) Africa Super Bantamweight Titlist Ghana’s Wasiru Mohammed is ready for his first defense and want an opportunity to win the WBO Global belt as well.

So the fight is now on Saturday 29th of June at the Accra Sports Stadium when he takes on Loren Japhet from Tanzania.

Wasiru knocked out former Champion Isaac Sackey in October last year to win the WBO Africa Super Bantamweight title and he is not looking back.

He was ranked number 14th in the WBO World Rankings and Ghana’s number 1 in the Super Bantamweight Division.

A source close to the young power boxer says the Ghanaian is relishing his return to the ring and is already battle-ready for his opponent.

Wasiru who enjoys to be called ‘Gyata Bi’meaning son of the lion is not worried with the change in date, but now has some time to train harder to finish on time to grab the WBO Global Title. His coach, Lartekwei Lartey also believes it is good for them to attract more fans and publicity.

Wasiru wants to be the first Ghanaian Boxer to win a WBO Global Title in the bantamweight division since it was introduced last year.

The new date is June 29, 2019 and boxing fans cannot wait to see the explosive Lion Kid Boxer in action again.

There are other crack boxers on the bill in supporting bouts and the promoters say its going to be another memorable moment for Ghana Boxing with Gyata Bi.