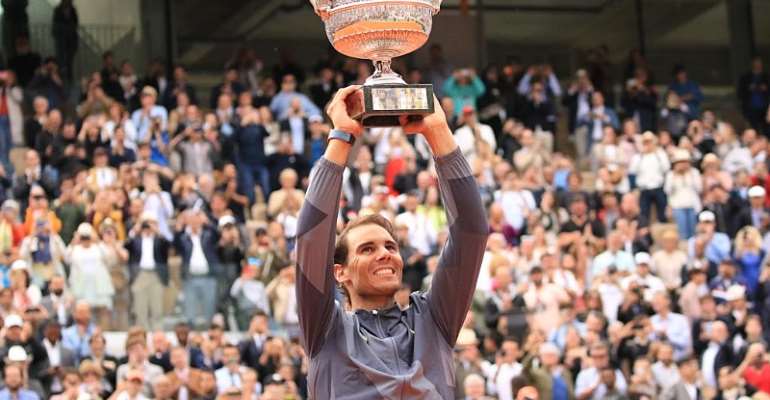 It was his 18th triumph at a Grand Slam championship and he moves to within two titles of Roger Federer's record haul of 20.

The Roland Garros stadium on the western fringes of Paris has been the cornerstone of Nadal's achievements. He won his first title as a teenager in 2005 beating Mariano Puerta in the final.

Nearly a decade and a half later, the Spaniard was on centre court again on the final Sunday of the clay court season's most prestigious tournament unleashing his vicious lefthanded spins and chasing seemingly lost causes.

He took a hard fought first set after 53 minutes. Nadal went a break down but hit back immediately to level at 3-3. He then saved a break point before holding to lead 4-3.

Thiem cracked to allow Nadal a 5-3 advantage and the Spaniard collected the opener when Thiem's backhand drive flew into the tramlines.

Thiem levelled the match as the second set neared a tiebreaker. Claiming it 7-5 appeared to be a fatal tactical error.

The 25-year-old Austrian was swept away in the third set. He won only one of the first 16 points as Nadal surged into a 4-0 lead. Thiem managed to land a game. But Nadal sped away again to claim it 6-1.

Once Nadal broke in the fourth to lead 2-0, the horizon looked glooomy. Thiem did well to save three break points to get onto the scoreboard for 1-3.

But Nadal was not entertaining a comeback and raced away again to enhance his legend.

After collecting the trophy from Rod Laver, a former French Open champion, Nadal said: “It was a dream to play here in 2005 and win so it's incredible to be here in 2019 and win again.”

A tearful Thiem told the spectators: “It's tough because I honestly love this tournament with all my heart. I will try again next year.”

Turning to Nadal, he said: “Well done, Rafa, you are such an amazing champion. It is unreal what you have done here.”