Police In Search Of Joshua Clottey For Assault 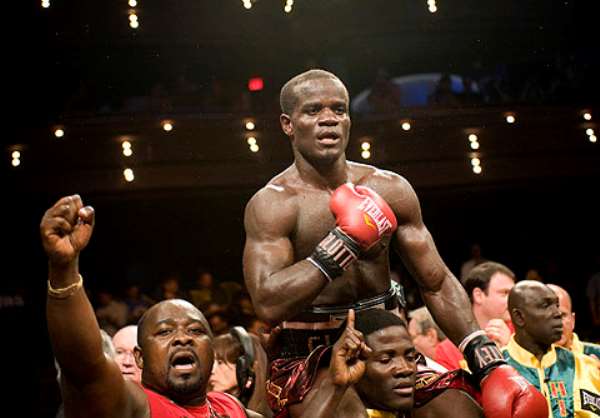 The Accra Police are on the hunt for former IBF welterweight champion Joshua Clottey for assaulting a footballer in Bukom, Accra.

On Tuesday 4th June around 5 pm, during a football match at the Bukom football park, 21-year-old Sylvester Ayitey-Adjin was at the receiving end of Joshua Clottey’s severe beatings in the midst of what onlookers said was a slight misunderstanding.

Eyewitnesses said the former IBF Champion punched the footballer two times in the mouth and nose, leading to blood oozing out.

Joshua Clottey has since after the incident, gone into hiding. Police told this news portal they are working around the clock to get him fished out.

Sylvester Ayitey-Adjin being treated at the hospital

Checks at the police station revealed that statements and a medical report form have been received from Ayitey-Adjin.

The footballer was treated by doctors at the Korle Bu Accident and Emergency unit yesterday.

The physician on duty confirmed that the patient was assaulted, stating “Examination shows that patient …[had- mouth lacerations, bleeding from the mouth, severe pain at the jaw, neck, and head.”

According to sources, the victim has gotten the pro bono services of some lawyers to see to this assault case against Joshua Clottey taking a full haul.

Since the incident taking place, 15 other residents of Bukom have also lined up at the James Town police station to complain that Joshua Clottey has visited mayhem and assault on them one way or the other.