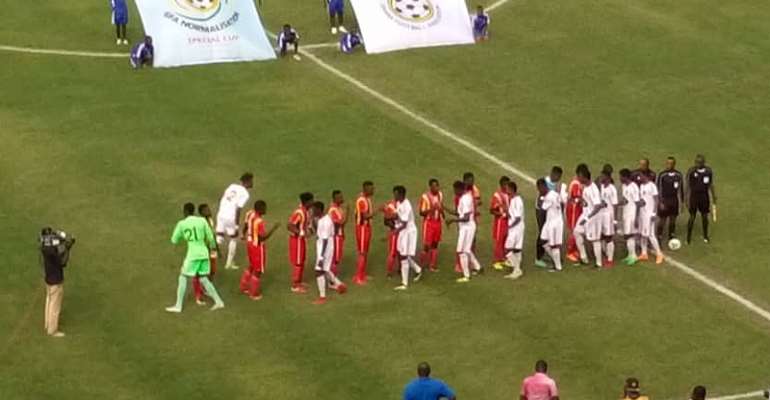 A demolishing exercise earlier today at the Accra Sports Stadium saw Hearts of Oak beat West Africa Football Academy (WAFA) by four goals to nothing to ensure they go top of the Premier B standings of the Normalization Committee Special Competition.

The two top performing teams in the Division faced off for the second time in the ongoing Competition knowing that a win could send the winner top of the pile. At the end of it all, it is the Phobians who came out on top.

The Accra based club after several attempts in the first half to break the deadlock finally got rewarded for their efforts on the 28th minute when academy graduate Michelle Sarpong powered home a fine strike from close range.

Now in full control of the game, the Rainbow boys continued to pile pressure on the visitors until they finally got their second on the day through dependable Captain Fatawu Mohammed who headed in an inviting cross from Joseph Esso.

An improved performance from WAFA in the second half saw them get into some dangerous positions but they could not find a way past Richmond Ayi who was in post for Hearts on the day. The victors cemented the victory midway through the second half when young attacker Umar Manaf dinked one from outside the box into the back of the net.

Late in the game, substitute Kofi Kordzi dribble past four WAFA players before calmly putting the ball in the back of the net to ensure a comprehensive victory for the Phobians.

Hearts now sits comfortably at the top of the log with 18 points after playing 9 matches.