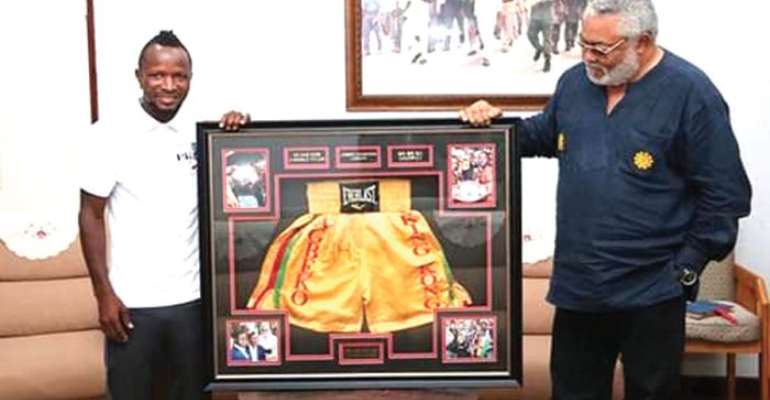 Former world champion Joseph Agbeko is bent on exorcising the ghost of his former conqueror, Abner Mares which has been haunting him for the past eight years in order to reclaim a world title to cement his legacy.

The fighter, known also as ‘King-Kong’, lost twice to the Mexican in August and December 2011 along with his International Boxing Federation (IBF) world bantamweight and World Boxing Council (WBC) Silver bantamweight titles.

Since then, Agbeko, 39, has lost every chance to win a world title, with his last attempt being a unanimous decision loss to Cuban Guillermo Rigondeaux at the Boardwalk Hall, Atlantic City, in the United States six years ago.

After a courtesy call on former President Jerry John Rawlings at his residence last Thursday to present to him the trunks he wore on the night of his defeat to Mares, Agbeko (35-5-0) believed he had buried the Mares demon with that gesture.

“After the Mares defeat, things were not going well for me and the world title seemed far from me, so I visited the former President, who is my Godfather and inspirer, to bury that part of my past,” he told the Daily Graphic in an exclusive interview.

He maintained that the visit was also to get Rawlings’ blessing, boost his morale physically and spiritually to be highly motivated to win a world title again.

According to him, he believed the donation would ease the pain he suffered from losing twice to Mares.

“I have never watched the Mares fight. It hurts to lose to him. I presented the shorts as a sign of moving on to become a world champion again,” the boxer explained.

Agbeko, who is currently ranked second by the WBO, will step into the ring this Saturday against Tanzania’s Hashimu Zuberi in an African World Boxing Organisation Africa Bantamweight title bout at the Aborigines Beach Resort at Keta in the Volta Region.

He expressed the confidence that his determination and the experience of his trainer, Kwasi Ofori Asare, would enable him to win a world title again.

He also expressed profound gratitude to Mitch Williams, CEO of Aborigines Promotions, who has greatly supported his career relaunch.