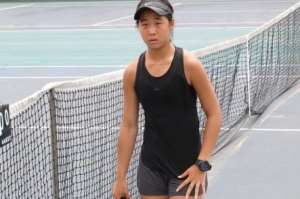 Chinese tennis star Han Shi says she is eyeing the ultimate title in the ITF U-18 World Junior Circuit currently underway at the tennis arena of the Accra Sports Stadium.

The 13-year-old player has been phenomenal in the competition so far as she battered every opponent to set a date with Egyptian Hagar Ramadan in the final of the girls singles category.

Speaking to the Graphic Sports Online ahead of the game, she said: “I want to win the trophy and build more points that is why I am working hard. So far, the tournament has been good. The players and the organisers have made it interesting. Everything is good and I like the weather. Every time I play, I feel good and I know I am going to win that trophy.”

Han Shi will face Hagar Ramadan in the final on Saturday

Before coming to Ghana, Han Shi ranked 1530 at the junior level in the world, participated in the Cambodia ITF Junior Circuit but lost the final berth to number one seed Tararudee Laniana.

64 players from 20 countries are participating in the ITF-certified tournament which will end on April 13.