Stars Will Crush Them All 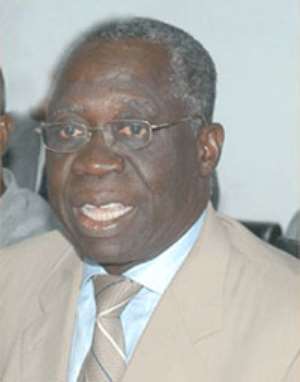 EDUCATION AND Sports Minister, Hon. Yaw Osafo-Maafo, is optimistic Ghana's Black Stars would give of their best to crush all Group opponents, come Germany 2006 World Cup.

The minister, who was speaking at the 2005 gt Premiership Awards ceremony, stressed the need to unify the nation, through sports, particularly during 2006, a busy year for the sporting world.

Hon. Osafo-Maafo, who is also, the Member of Parliament (MP) for Akim-Oda, lamented clubs' lack of sponsorships, pointing out that, the phenomenon has been the bane of Ghanaian clubs, who qualify for continental assignments. He, therefore, appealed to all and sundry, predominantly corporate bodies, to come to the aid of clubs.

The Akim-Oda MP, further, asked all soccer-loving fans, to help assist the sport, in schools, so as to unearth more talents for the country. In another development, the minister, on Tuesday, handed over the site for the construction of the Sekondi Sports Stadium, to Shanghai Construction Company Limited, the project contractor, at Essipong, near Takoradi. The stadium, when constructed, becomes one of the venues earmarked for the hosting of the 2008 African Nations Cup, in Ghana.

According to Hon. Osafo-Maafo, the Sekondi and Tamale Sports Stadiums, would be constructed by the Shanghai Construction Company Limited of China, at a cost of 38.5 million dollars, each.

He disclosed that, the two stadiums would, each, have a seating capacity of about 20,000 spectators.

The minister added that, the refurbishments of the Ohene Djan Stadium, in Accra, as well as the Baba Yara Stadium, in Kumasi, are on course, to increase their seating capacities.

Hon. Osafo-Maafo stated that, the Sekondi Sports Stadium would have a 250 seating area for very important personalities (VIP), as well as other facilities, including a 40-room hotel, restaurant, shopping mall, a gym, and room for the press.

He indicated that, Ghana would have four stadiums for the CAN 2008, but Tamale and Sekondi-Takoradi were chosen for construction of the new sites, in addition to those at Accra and Kumasi.

Hon. Osafo-Maafo explained that, the selection of Sekondi-Takoradi was based on merit, as well as the passion of the people for soccer, which has, over the years, produced a number of talented soccer stars for the country. He banked his hopes on the contractors, to complete the stadiums, by September 2007.

This, he noted, would enable the Confederation of African Football (CAF) embark on its inspection in October 2007.

Hon. Osafo-Maafo said, the stadium is of vital national interest to the success of the hosting of the CAN 2008, and as such his ministry would give the contractors the necessary assistance, to enable them complete the project on schedule.

Hon. Joseph Boahen Aidoo, Western Regional Minister, affirmed that, the stadium is a national project, and he therefore, entreated everybody put hands on deck, to ensure its success.

He hinted, the stadium would not belong to any particular sector of the people, adding that, it is expected to bring economic, and other benefits to the region, and the country, in general.

Awulae Attibrukusu III, president of the Western Regional House of Chiefs, advised traditional rulers against litigating over the land earmarked for the stadium.

He said, litigation should be avoided, so that the construction works would not be interrupted, in any way.

Nana Kobina Nketsia, Chairman of the Sekondi-Takoradi Venue Organising Committee of CAN 2008, warned that, any person or group of persons, who might try to disrupt work on the stadium, would be taken on by the appropriate authority.

The minister, later, unveiled a model of the stadium to the chiefs and the people.

Give EC The Peace Of Mind To Work – NPP Communicator Tells N...
57 minutes ago