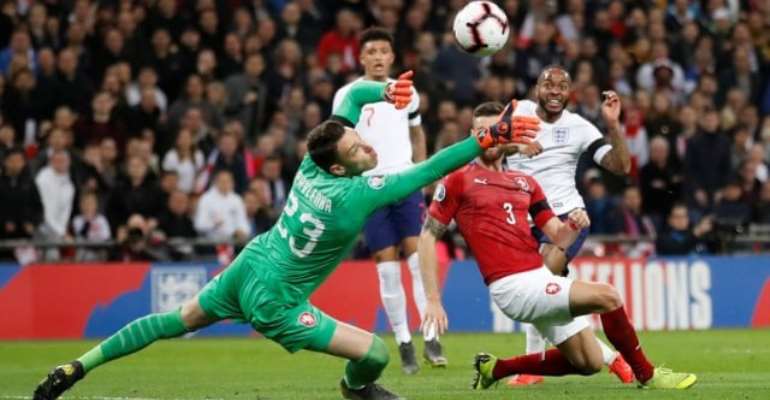 England made a hugely impressive start to their Euro 2020 qualifying campaign as Raheem Sterling scored a hat-trick in a 5-0 thrashing of a sorry Czech Republic side on Friday.

A mood of optimism swept around a large Wembley crowd before the Group A game kicked off and England’s hungry young lions responded with a display full of pace and panache.

Sterling opened the scoring from Jadon Sancho’s cross in the 23rd minute and Harry Kane’s penalty put England in complete control on the stroke of halftime.

There was a brief flurry from the Czechs at the start of the second half but normal service was soon resumed as Sterling curled home his second of the night just past the hour.

The Manchester City forward was unstoppable and he completed his first hat-trick for England seven minutes later with a deflected drive past Czech keeper Jiri Pavlenka.

Sterling was substituted to huge applause soon after as manager Gareth Southgate gave Chelsea teenager Callum Hudson-Odoi his first senior cap — at 18 years 135 days the youngest player to make his England debut in a competitive match.

West Ham United midfielder Declan Rice also came off the bench to win his first England cap, weeks after switching allegiance from Ireland with whom he earned three senior caps.

The Czechs’ misery was complete when Tomas Kalas bundled in an own goal in the 84th minute.

In Friday’s other Group A match, Bulgaria drew 1-1 at home with Montenegro.