AFCON U-20: Defeated Black Satellites To Return After Short Stay In Niger 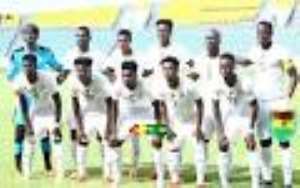 Ghana’s Black Satellites are expected to be back in the country after their elimination from the ongoing African Youth Championship.

Coach Jimmy Cobblah and his men are expected to arrive at the Kotoka International Airport on Tuesday, 12th February, 2019.

The Black Satellites were eliminated from the tournament by Mali in their last group game. Ghana needed just a draw to progress to the next stage of the competition but missed out after suffering a 1-0 defeat to the Malians.

Ghana exited the competition with just three points out of a possible nine points. The Satellites won their opening game by two goals to Burkina Faso before losing to Senegal by same goal margin.

The Satellites elimination wasn’t much of a surprise as they were shambolic in all their friendlies in the build-up to the tournament.

Ghana’s elimination from the group stage means the Black Satellites will miss out on the FIFA U-20 World Cup to be held in Poland come May.