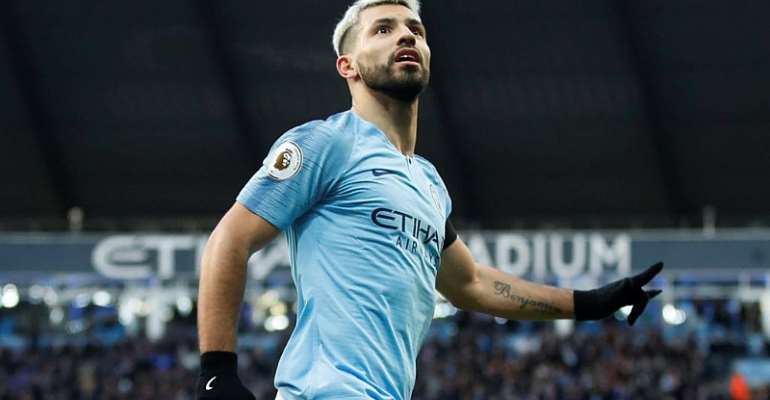 City were ahead after only four minutes when Sterling slotted in Bernardo Silva's pass into the Chelsea penalty area.

Aguero added two more in six minutes as Pep Guardiola's side took control of the clash. City were 4-0 up within 25 minutes after Ilkay Gundogan's shot from the edge of the area.

Chelsea started the day in fifth place with 50 points and would have leapfrogged Manchester United with a draw or a win.

The 6-0 thrashing means they drop to sixth behind Arsenal, who also have 50 points but have scored more goals than their fellow Londoners.

The loss at the Etihad continues a miserable away run since the turn of the year. Chelsea have failed to score at Arsenal, Bournemouth and City and have conceded 12 goals in the defeats.

The 4-0 loss at Bournemouth on 30 January was their worst in 23 years. It prompted manager Maurizio Sarri to hold an hour long post-match discussion with his players.

They responded on 2 February with a 5-0 thrashing of bottom club Huddersfield Town at Stamford Bridge.

But eight days later, the first team has suffered its heaviest defeat in any competition since capitulating 7-0 to Nottingham Forest in April 1991.

Streak
While Chelsea wrestle with their inconsistencies, Aguero can bask in his marksmanship a week after scoring all three goals in City's 3-1 win over Arsenal.

The 30-year-old Argentine completed his second triple from the penalty spot 11 minutes into the second-half to move alongside Alan Shearer on the highest number of three goal performances since the inception of the Premier League in 1992.

Sterling finished the rout of Chelsea 10 minutes from time. "It was a terrific performance from the team," Sterling told Sky after the game.

"It was just a win, another three points," the England international added. "We scored a lot of goals but the most important thing was to put in a good performance and get three points, and that's what we've done."

City, like Liverpool, have 65 points. But Guardiola's side has played one more game than the Merseysiders who will reclaim pole position if they avoid defeat at Manchester United on 24 February.

City take on Chelsea the same day in the League Cup final at Wembley.