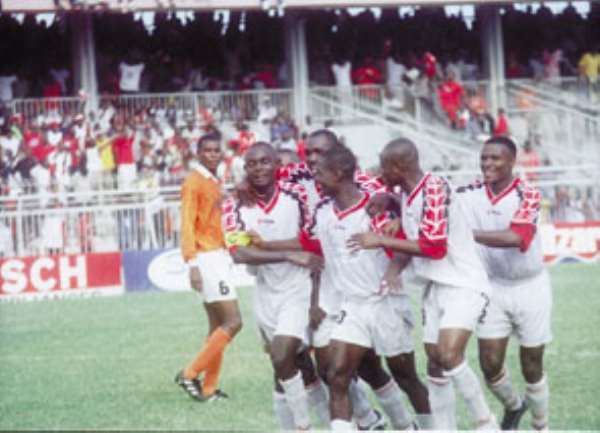 IN Accra and Kumasi, Ernest Thompson and Jarvis Peprah are still trying to outdo each other in convincing a shocked nation about who between Hearts of Oak and Asante Kotoko paid to earn points in the just ended Ghana Telecom Premier League.

Kotoko lifted their 20th league title in their 70th year on Sunday, amidst the usual colourful atmosphere at the Baba Yara Stadium. But in many parts of this football dominated country and particularly in those areas where Phobia is the chant, they were not amused.

Hearts had demanded that the Ghana Football Association (GFA) should not hand over the league trophy to the Porcupine Warriors until they thoroughly investigated the bribery allegations by Real Tamale United (RTU) fans against their own management and Kotoko.

In a compelling presentation on radio, Mr Thompson said given the weight of evidence against Kotoko, the FA would be doing the image of Ghana a major disservice if it went ahead and declared Kotoko the winner and handed them the trophy.

Hearts even claimed and still insist that they were in possession of recordings of RTU players confessing to having been approached with bribes from Kotoko.

These are serious allegations but despite GFA's promised to order investigations, it went ahead to present the trophy to Kotoko after their match with Arsenals in Kumasi, in the presence of the Asantehene, Otumfuo Osei Tutu ll. As far back on Saturday, they danced through Oseikrom and partied in the immediate hours before the game to celebrate their 20th league title after being declared winners in the dispute with RTU.

Watching the images of Kotoko officials with their white handkerchiefs taking a victory lap at the Baba Yara Stadium, it seemed they didn't care a hoot about the allegations by Hearts.

But a day later, the Kotoko communication officer, Jarvis, called a press conference and responded to the Hearts allegations with claims of his own that Hearts had conveniently fixed their game against Heart of Lions at the Kpandu Park which the Phobians won 3-0.

As if to march Hearts boot for boot, Jarvis played a tape he claimed was a conversation of match-fixing between top officials of Lions and the Premier Club. The ongoing feud between the two most glamorous clubs has the trappings of a case that could cause ripples in Ghana football if the authorities failed to take the bull by the horn by verifying the allegations. I, however, strongly that very little would come out of this public fight which is exciting for the media in the same manner that the Wenger-Maurinho war of words was. But whatever happens the outcome of such investigations won't alter the fact that Kotoko are the 2005 GT Premier League champions. Some fans of Hearts believe that it will forever remain tainted glory even though the red-shirted boys will gladly remember for years that 2005 was the year they beat the “Never Say Die” club for the league title after a tight race. It does not do the credibility of the Ghana Telecom Premier League any good that a league we all hailed as one of the most competitive and finest in several years should end on this note. When the Premiership had about five matches to the end, there were much discussions about the matches and wondered if King Faisal would upset the usual trend of Hearts or Kotoko winning the league. Kotoko jubilated when Hearts faltered at Tema against Power FC and justifiably rode on the euphoria for some weeks.

Hearts are likely to make some major changes in the technical team and Ernest Thompson's scathing criticism of the technical team after the loss to Power and general dissatisfaction by fans over Sanzio Bahner's performance suggest that the German must be the first to be fired.

AshantiGold, long regarded as the club that could challenge Hearts and Kotoko, finished their third season outside the top four. You must wonder why such fine organisation in Obuasi does not translate into success on the pitch.

At Liberty Professionals, they started the season with high hopes. It was the year they wanted to win the title but the ban imposed on Michael Osei and the departures of Peter Ofori Quaye and Michael Helegbe to Europe midway through the season, might have shattered their hopes.

They, however, have vowed to improve over their performance next year — their tenth year in the local league. It will be the ambition of many of the top clubs, even though for Hearts and Kotoko, it is about time the priority shifted elsewhere.

Having missed the African Champions League group stage since Hearts won it in 2000, next season must be the year when that shameful self inflicted exile ends.

Clearly, it is Kotoko who will be hard pressed to deliver in Europe. Ranked at the turn of the century as the third best club on the continent behind El-Ahly and Zamalek, Kotoko have dropped far below that grade.

Next season, they can perform their best and win the Premier League without having a single player, especially their strikers, hit double figures again. But they are likely to lose a great deal of their bragging rights as a continental giant, if they fail to make any impact.

There are many within the club who appreciate that. Issah Ahmed, who is unlikely to be around next season, has indicated that Africa must be the target next season. And having already captured their former star player Charles Taylor, Kotoko are determined to invade the camp of King Faisal with the aim of strengthening their African squad.

But Taylor, as Etoile du Sahel discovered, won't guarantee continental success. He might even be cooling off somewhere during the crunch games as he did when Etoile went through the semi-finals and the finals.

What will help Kotoko regain anything close to their prime place is a consistent squad and more importantly, a strike force that will woefully fail to click upfront as it happened in the season which has ended with tapes flying everywhere.