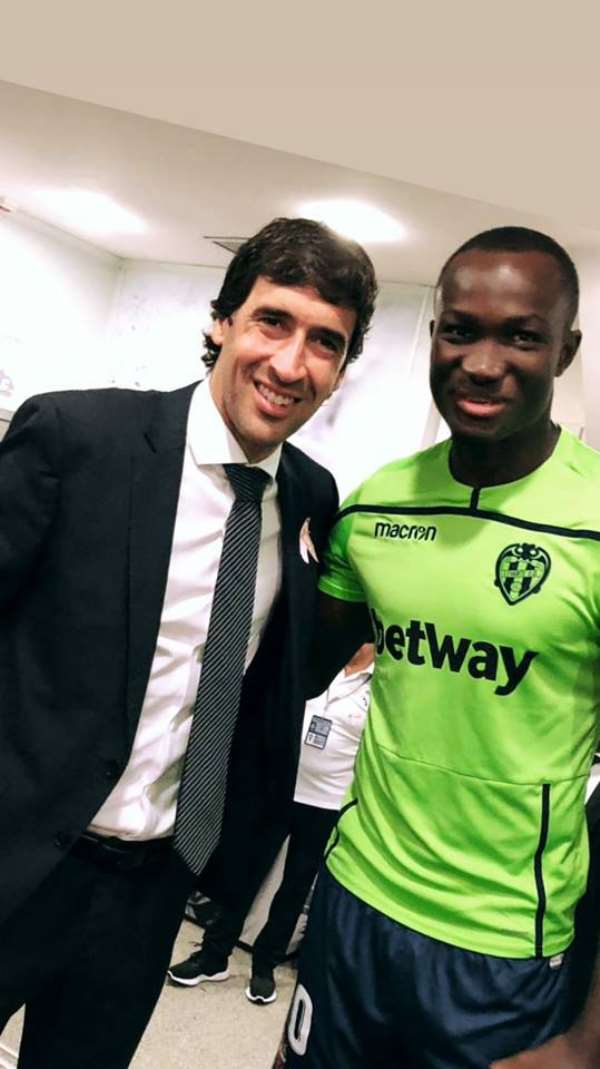 Black Stars attacker Raphael Dwamena was full of delight when he caught up with one of his footballing icons, Raul Gonzalez Blanco.

Levante defeated Raul's former club 2-1 at the Santiago Bernabeu as the European champions slip to a fourth defeat in their last five games.

Raul Gonzalez is considered one of the greatest players from Spain and to play for Real Madrid after scoring 228 goals for Los Blancos winning several titles with the club.

Dwamena surprised after meeting the forward posted on Facebook," When you meet the legend Raul Gonzalez Blanco. "

In the game on Saturday, JosÃ© Luis Morales Morales who started in place of Emmanuel Boateng opened the scoring for the away side just six minutes into the first half.

Starman Roger MartÃ­ scored from the penalty spot on the thirteenth minute in what ended up to be the winning goal.

The second half started with the two zero scoreline unchanged. Coach for Real Madrid Julien Lopetegui made some changes to try and get something out of the game.

The likes of Gareth Bale and Karim Benzema were instrumental as Marcelo Vieira pulled one back for the Spanish giants midway through the second half.

Emmanuel Boateng was later introduced into the game with eleven minutes remaining. The Black Stars player together with his teammate defended their lead to record a massive victory over the Galacticos.