Moses Foh Amoaning Discloses How He Rejected GFA Presidency In 1996 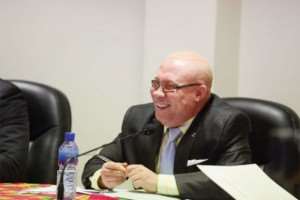 Senior law lecturer, Moses Foh Amoaning has revealed that he turned down the chance to become Ghana Football Association president in 1996 over internal politics.

According to the former Ghana Boxing Association boss, he was offered the opportunity to head the nation's football governing body during Samuel Brew Butler's last days in office but he rejected due to wrangling at the sector.

'I do not have anything against anybody but I'm a very passionate person and as you can see I'm a very busy man, and I don't have time for all of this, but he [Thunder] must understand that Ghana Football existed before they came into being, if everybody went to register like will he [Thunder] come to meet Ghana football,' he told Happy FM.

'Let people understand that way back in 1996 I was asked to come and run Ghana Football but I decided against it, I wasn't interested in it because there was an inbuilt conflict of interest in football that's why I chose to join boxing, so let them know. Where were those people by then?'

'I'm not too sure even Kwesi Nyantakyi had finished Law School at that time, that's how long some of us would have been involved in founding Ghana football so if they don't know they should find out.'

'There is no emotion I'm just passionate. I'm passionate because Ghana football deserves better, a country that has won laurels on four occasions in terms of the AFCON and since 1982 we have never won anything, are you happy? Look at the way we are running our football league, referees putting money in their socks, is it better, so if anybody says I'm being personal I don't understand it'.