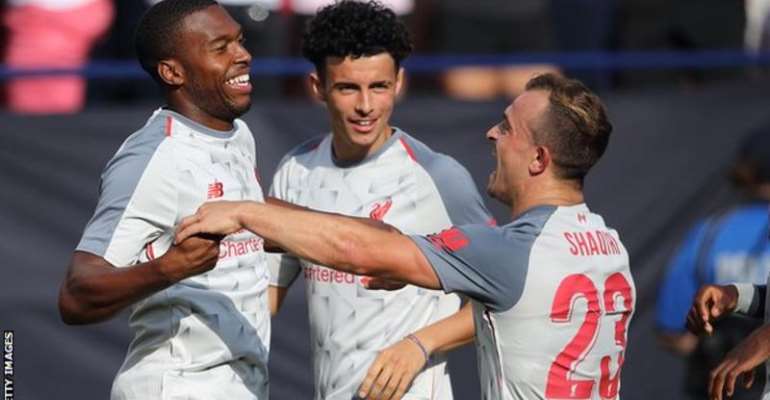 Jose Mourinho named a starting XI including five players who did not feature in the Premier League for United last season, while Liverpool fielded a strong side featuring Mohamed Salah and Sadio Mane.

Jurgen Klopp's team took the lead on 26 minutes when Mane stroked home from the penalty spot after Salah was brought down by Demetri Mitchell.

But their advantage did not last long as United levelled through Andreas Pereira's superb free-kick from 25 yards.

Liverpool substitute Daniel Sturridge continued his impressive pre-season form when he scored with his first touch after 66 minutes before Sheyi Ojo added his side's second spot-kick of the game six minutes later.

Shaqiri, who arrived for £13m from Stoke City earlier this summer, then added gloss to Liverpool's win by firing home Ben Woodburn's cross in acrobatic fashion.

Liverpool round off their pre-season preparations with a trip to Dublin to face Napoli on Saturday (18:00 BST), before hosting Torino at Anfield on 7 August (19:30 BST).

United continue their International Champions Cup (ICC) campaign against Real Madrid in Miami on Wednesday (01:05 BST), before facing Bayern Munich in a friendly at the Allianz Arena the following Sunday (19:15 BST).