Muntari: I Have Unfinished Business With The Black Stars 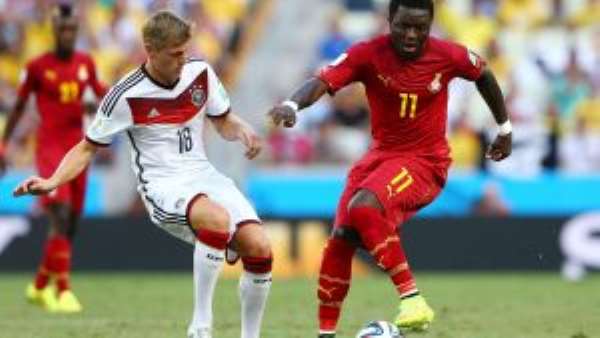 Veteran Ghanaian midfielder Sulley Ali Muntari says he has not ruled out a return to the Black Stars and is keeping hope alive of making a return.

The outspoken Muntari last represented Ghana at 2014 World Cup in Brazil where a bust-up with an Executive Committee member of the GFA resulted in his expulsion from the Ghana camp alongside Kevin Prince Boateng.

He has since rendered an apology for his behaviour and insists that he still has a lot to offer the national team even at the age of 33.

He is a free agent currently and has been training with Accra Hearts of Oak as he hopes to get in shape for any offers that might crop up.

In recent interviews, he has stated his unflinching love for the national team and the dedication to the national colours.

“If I start playing, I would love to come back and play for the Stars”.

“So far as I have not retired from football and still capable of playing the beautiful game, I would always love to be in the white jersey again if am given the opportunity,” he told Ghana News Agency.

He won’t be the only Ghanaian player plotting a comeback to the national team, as Kwadwo Asamoah of Inter Milan has also promised to return to the Black Stars following a four-year absence.

With the Afcon 2019 qualifiers set to resume it remains to be seen what surprise call-ups coach Kwesi Appiah will make as Ghana seek to make it a competition to remember.

Muntari spent the 2017/2018 season with Spanish Primera side Deportivo La Coruna where he made 8 appearances.