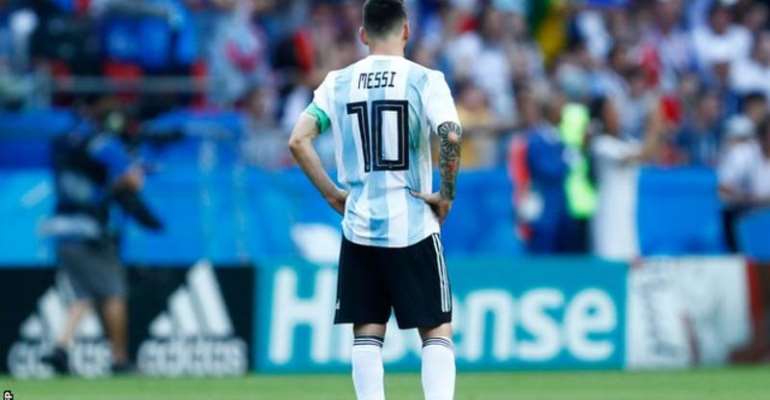 On the highest-scoring day of World Cup knockout football since 1970, two of the greatest players of all time failed to find the net.

For Lionel Messi and Cristiano Ronaldo, their inability to make decisive impacts in their teams' last-16 matches means their tournaments - and perhaps their hopes of claiming the game's biggest prize - are over.

Defeats for Argentina against France, and Portugal against Uruguay leave the pair - aged 31 and 33 respectively - knowing the chances that they will ever be able to call themselves World Cup winners have dropped sharply.

'There is a sadness in seeing Messi go home'

Messi was a deflated figure as he pulled off his captain's armband and trudged off the pitch in Kazan, walking into the tunnel without a glance back following a thrilling 4-3 defeat by France.

He had given everything - providing two assists in an encounter full of passion and drama - but it was not enough.

"He was isolated in the first half, and in the second half he hardly had a touch."

Argentina certainly failed to provide the service Messi so regularly enjoys at Barcelona. He had just four touches in the box and only one shot on target against France.

It was the latest frustrating chapter on the international stage for Messi, who retired from the national team in 2016, only to later reverse his decision.

"There is a sadness in seeing Messi - perhaps the greatest player ever - go home," said Spanish football expert Guillem Balague. "He knew he couldn't do much with this side. He knew he couldn't do it all on his own. Argentina have been all about heart and complete disorganisation. France put a gear up and the best team won."

While not as productive as he might have hoped, Russia 2018 has certainly been eventful for Messi.

He missed a penalty in Argentina's opening game against Iceland and looked stressed during the national anthem prior to their defeat by Croatia.

A man of the match performance and a sublime goal against Nigeria carried Argentina into the last 16 - after which he admitted he "could not remember such suffering before", so great had the pressure been going into that must-win game.

There were even reports that he was dictating team selection and tactics, a claim denied by manager Jorge Sampaoli.

After their last-16 exit, Sampaoli said Argentina "tried to use everything" to help Messi.

"We have the best player in the world and we had to try to create collective situations to really use that player who can have many brilliant moments," said Sampaoli.

He carried his blistering form into the victory over Morocco but missed a penalty - and might have been sent off - in the draw with Iran that took them through to the knockout stage.

And, like Messi, he could do nothing to help his side avoid defeat in the last 16, as Edinson Cavani scored twice in Uruguay's 2-1 win.

So is this the end for Ronaldo, a European champion in 2016, at international level?

Portugal boss Fernando Santos insisted afterwards his captain "still has a lot to give to football" and may not yet be ready to retire from the national team.

"There is a tournament in September [the Uefa Nations League] and we hope Cristiano will be with us to help the players grow," he added.

"It's important to have a captain present there and he's always there for us."