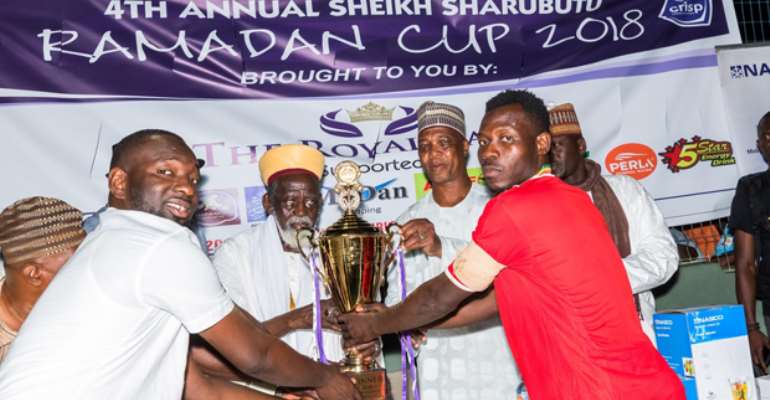 Mamobi won the 2018 edition of the Sheikh Sharubutu Ramadan Cup after defeating Madina 2-1 in the finals over the weekend.

Mamobi lifted the trophy in a dramatic fashion after scoring two late goals.

Madina, the defending champions, were on course to retaining the trophy after taking the lead deep into the game.

Mamobi, however, staged a late comeback with two quick goals to the admiration of all, including the National Chief Imam, Sheikh Osman Nuhu Sharubutu.

With few minutes to end the match, Mamobi equalized, and as the game appeared to be heading for the penalty shootout, they snatched a dramatic late winner to spark wild celebrations from their supporters.

The journey to the finals was tough for both sides, as they had to overcome strong opponents.

Mamobi also eliminated Shukura in the preliminary stage, Nungua Zongo in the quarter finals before knocking out Alajo in the semi finals to reach the finals.

The Sheikh Sharubutu Ramadan Cup, which started in 2015, is organized by Crisp Communications under the auspices of the National Chief Imam.

It brings together Zongo communities to celebrate the successful end of Ramadan every year.

The competition is also aimed at promoting friendship, discipline and unity among the youth of the various Zongo communities through football.

Sixteen Zongo communities from three regions of Ghana participated in this year's edition.

The rise of the competition has been meteoric in the last three years after it started with only eight communities in 2015.

The Royal Bank, for the third successive time, was the headline sponsor.