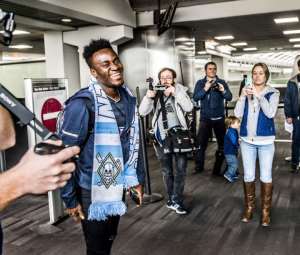 The swift attacker joined Union for a fee of $2.5 Million.

According to him, he joined Union to enhance his development and also help the club to reach their target.

“My expectation is to come here and develop further as a player and as a human being. Also, I want to help the team achieve their goals.” Accam told footballmadeinghana.com

“It was a trade with Chicago Fire but so far Philadelphia is an amazing club with good academy development and culture. I’m happy to be here.

“My time in Chicago Fire was up and down but it has made me a better person than I was before. Chicago Fire will always be part of me.” Accam added.

He joined Chicago Fire from Swedish side Helsingborg IF in the summer of 2015 and went on to play 85 games scoring 38 goals and providing fifteen assists.

He was twice named in the MLS team of the season and attracted the interest of several European clubs including Trabzonspor in Turkey, Caen in France, Monchengladbach in Germany as well as Dutch side PSV Eindhoven but chose to stay in the MLS.