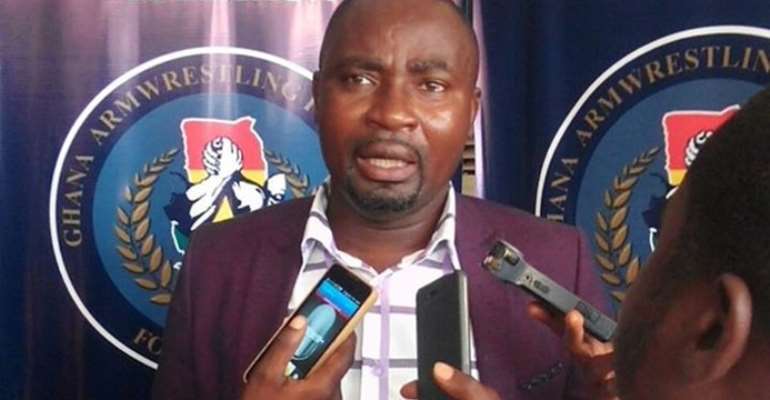 The President of the Ghana Armwrestling Federation (GAF), Mr Charles Osei Asibey and the National Armwrestling Team – Golden Arms have received nominations from the Sports Writers Association of Ghana (SWAG) for its 43rd Awards Night scheduled for April in Accra.

The Golden Arms which is the current National Team with the highest haul of medals (22) from a single international competition will battle with the Local Black Stars Team who won the 2017 West African Football Union (WAFU) tournament and the National Female hockey Team – Black Sticks Ladies for winning silver at the 2017 Hockey Africa Cup of Nations and also making it to the 2018 Gold Coast Commonwealth Games.

The “Golden Arms” travelled to Nigeria and placed an overall 2nd in the 8th African Armwrestling Championship in Lagos in July 2017.

GAF President, Charles Osei Asibey was also nominated for the Federation President of the Year for his immense contribution to the promotion and development of arm-wrestling in the country. He, by his effort, was elected unto the Africa Armwrestling Federation board as the Deputy General Secretary.

Osei Asibey who doubles as the Communications Director for the Ghana Olympic Committee (GOC) would face a stiff opposition from five other contenders.

Golden Arms' Isaac Nii Amugi has also been nominated for the Discovery of the Year category after winning two gold and 2 bronze medals in the 2017 Africa Armwrestling Championship. His category has David Akwei (Weightlifting) and Suzzy Dede Teye (Football).

Haruna Tahiru who won 2 Gold medals at the same championships completes GAF nominations for the 43rd SWAG Awards in the Para-Athlete of the Year category. He would compete with Charles Narh Teye.

Election 2020: Only Uniform Personnel Will Be Deployed – Gha...
8 minutes ago