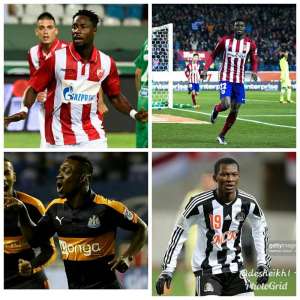 The four players will battle it out in one of the most prestigious awards of the night by the Sports Writers Association of Ghana in a few weeks.

Partey who has been very instrumental for both club and country looks set for the award but the enviable record of Christian Atsu who won the English Championship with Newcastle United, earning a return into the English Premier League seems a tough candidate.

Both Atsu and Partey were also instrumental for Ghana during the 2017 AFCON in Gabon where Ghana finished 4th but Partey was the only Ghanaian player to have made it into CAF's Best XI of the tournament.

To make the race more difficult for both Atsu and Partey is Red Star Belgrade forward Richmond Boakye who has recently been voted the club's player of the year 2017.

Yiadom is also the first Ghanaian player to score 42 goals in a calendar year in Europe after 20 years and has also guided his side to the Europa League round of 32 with his magnificent goalscoring feat.

What about TP Mazembe star man Daniel Nii Adjei who guided his side to lift the 2017 CAF Confederation Cup in a stupendous style? Nii Adjei scored the winning goal to aid Mazembe to lift the trophy.

Despite having no international influence in 2017, Nii Adjei relentlessly pushed Mazembe onto the echelons of African football with his splendid performances.

Who wins the award of the 2017 SWAG Footballer of the Year? The winner will be known a few weeks.