Barca Earn Draw Against Valencia As 'Ghost Goal' Not Given 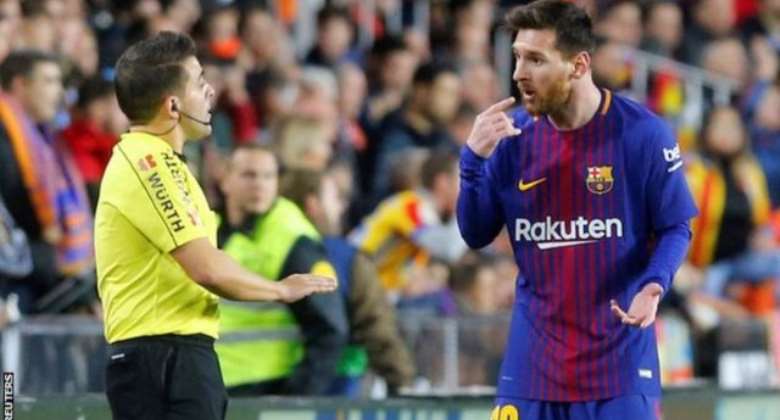 Barcelona rescued a late 1-1 draw at Valencia on Sunday, but the officials marred the match with a controversial decision in the first half.

Jordi Alba scored late on against his former club to salvage a 1-1 draw for Barcelona in Sunday's top-of-the-table clash against Valencia, but the match was marred by a hugely controversial decision to not allow a first-half Lionel Messi goal.

Messi tried his luck with a first-time effort on the edge of the area after half an hour and goalkeeper Neto fumbled the shot, resulting in the ball crossing the line by about a yard, but referee Ignacio Iglesias Villanueva and his officials failed to spot it, effectively costing Barca two points.

Ernesto Valverde's men produced what was arguably one of their best halves of football so far this season in the first period, as they quickly got to grips with Valencia's intense style and asserted their dominance at Mestalla.

The officials took centre stage with their howler, though, before Barca's misery worsened after the break.

Valencia were significantly more threatening from an attacking perspective in the second half, resulting in Rodrigo turning home from inside the six-yard box.

Barca ensured they returned home with a point, however, as Alba made the most of a sublime Messi pass to keep the club's unbeaten start to the league season – and a four-point lead over Valencia – intact, but there will be an undoubted element of frustration over the first-half controversy.

However, Before the top of the table clash between Barcelona and Valencia, Ever Banega scored the winner from the penalty spot as Sevilla produced another sensational comeback to win 3-2 at 10-man Villarreal in La Liga.

Eduardo Berizzo's side, who recovered from three goals down to draw 3-3 with Liverpool in the Champions League in midweek, fell behind in the 19th minute when Cedric Bakambu tapped in his ninth league goal of the season at the back post following Pablo Fornals' right-wing cross.

And the hosts appeared on course for victory after Colombia striker Carlos Bacca ran half the length of the pitch and rounded Sevilla goalkeeper Sergio Rico to double the lead eight minutes into the second half.

But Sevilla, whose head coach Berizzo was recently diagnosed with prostate cancer, once again showed their fighting spirit and were soon level thanks to two goals in as many minutes from French defender Clement Lenglet and creative midfielder Franco Vazquez.

Villarreal defender Victor Ruiz was then sent off after picking up his second yellow card for bringing down Gabriel Mercado in the box and Banega confidently dispatched the resultant spot-kick into the roof of the net 12 minutes from time to complete the remarkable turnaround.

Earlier in the day, Deportivo La Coruna and Athletic Bilbao fought out an entertaining 2-2 draw at the Riazor.

Both sides were in need of points given their league struggles this season and Bilbao skipper Markel Susaeta fired the visitors into a 16th-minute lead when he raced onto Aritz Aduriz's clever flick.

Inaki Williams -- who struck the post late on -- restored Bilbao's lead on the hour with a crisp finish, but Fabian Schar equalised from close range after 76 minutes.

Jonathan Viera struck a second-half equaliser as Las Palmas moved off the bottom by ending their eight-game La Liga losing streak with a 2-2 draw at Real Sociedad.

Midfielder Tana headed the hosts into a 21st-minute lead at Anoeta but goals either side of half-time from Willian Jose and former Manchester United midfielder Adnan Januzaj turned the game in Sociedad's favour.

Midfielder Viera then lobbed into an unguarded net in the 67th minute after home goalkeeper Geronimo Rulli had come off his line to clear before Sociedad defender Alvaro Odriozola was sent off in stoppage time after twice being booked for diving in the space of 11 minutes.