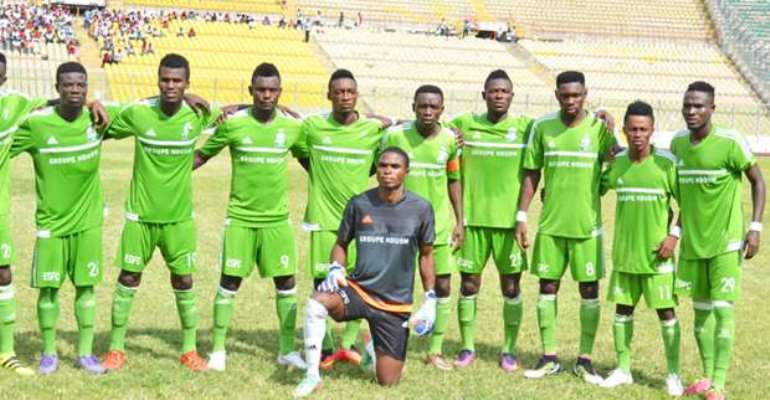 Elmina Sharks FC are hoping to cap off their maiden season in the premier league on the high as dethroned champions Wa All Stars visit them on Sunday.

They are currently lying 9th with 39 points on the league log following two defeats in a row. Only two points are keeping them away from the drop.

The debutants could finish the season within the top five if they beat the Northern Blues on Sunday at the Nduom sports stadium.

The Sea Animals nearly spoiled Aduana Stars last weekend with a first-half lead but the latter scored twice in the second half to see them off.

Wa All Stars failed in their title defence quest leaving the throne to Aduana Stars as the premier league champions.

The Northern Blues can only blame their terrible start to the season for such a scenario as they were a bit late with waking up and starting an impressive run in the finish of the season.

They have lost only one of their last eight matches going into the last round of fixtures on the weekend.

Last year's champions will still want to end the campaign in style and pick up a win in Sunday's match as they eye a top-four finish.

Interim gaffer Alhaji Mumuni Sokpari has a full-strength squad at his disposal for the game on Sunday in Elmina.

(W6 D0 L3)
~ Wa All-Stars have lost only one of their last eight fixtures in the premier league.

(W5 D2 L1)
~ Elmina Sharks FC have recorded only two losses in their last eight home games in the premiership.

(W5 D1 L2)
~ Wa All-Stars are winless in their last eleven matches in the premier league as travellers.

(W0 D5 L6)
~ Elmina Sharks FC are hosting Wa All Stars at the Nduom sports stadium in the premier league for the first time.

~ Wa All Stars didn't lose in their only visit to the Central region in the league this season. They drew 2-2 with Ebusua Dwarfs.

~ Elmina Sharks FC have kept six clean sheets out of their fourteen home games in the Premiership this campaign.

~ Wa All-Stars have managed to keep only four clean sheets at away in the premier league this term after fourteen matches.