I Would Love To Play Football Now – Usain Bolt 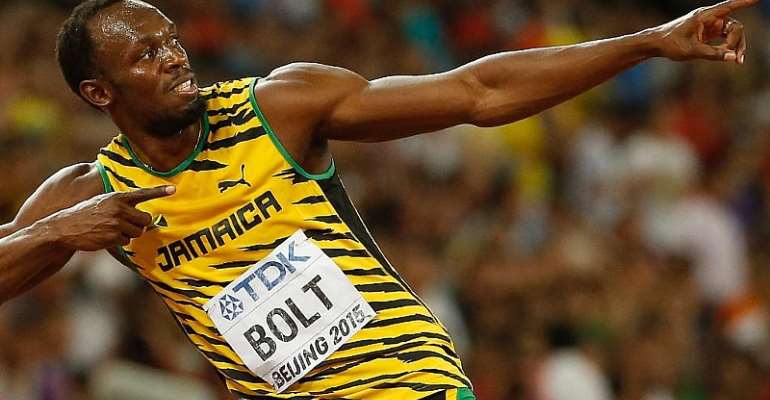 Usain Bolt is, quite simply, the best sprinter of all time. With two gold medals in 100 metres and 200 metres at the 2008 Olympic Games in Beijing, followed by a hat-trick of golds at each of London 2012 and Rio 2016 (adding the 4 x 100 metres relay sprint gold at both events) the Jamaican had unprecedented success in his discipline for around a decade.

The athletics legend made a slightly left-field promise during his track and field career: that he would take up football after hanging up his sprinting cleats. Having recently retired from the sport which he conquered, FIFA.com caught up with Bolt in an exclusive interview to discuss his love of football, his picks for this year’s The Best FIFA Football Awards™, and what it takes to be the best.

FIFA.com: You were 11 years old when Jamaica played at their only FIFA World Cup™ to date, at France 1998. How much of that do you remember? Does anything notable stand out from that tournament?

Usain Bolt: I can never forget when we qualified for the World Cup as our Prime Minister declared a national holiday. I remember our first goal at the World Cup too, Robbie Earle with that header against Croatia. Then in the final game, Theodore Whitmore scored twice in the win against Japan.

Now you’ve retired from sprinting, will you look to get involved in football at some level? If so, how?

Yes, I would love to play football now I’ve retired from track and field. I’ve been talking about it in interviews and a lot of clubs have reached out. Unfortunately, I got a bad hamstring injury in August and haven’t been able to do any training since then. Hopefully, I will be able to play some games in 2018.

Did you ever play football with other athletes when training or in camp?

I play a lot in Jamaica over the winter. It wasn’t something that my coach liked but fortunately, I didn’t get any injuries playing football that interrupted my athletics training.

There are so many great players, it’s not an easy team to pick! Obviously, I’d have Cristiano Ronaldo, Lionel Messi and Neymar leading the attack. I’ll put Gigi Buffon in goal. In defence, I’ll go for Sergio Ramos and Leonardo Bonucci in the middle with Marcelo and Dani Alves as full backs. In midfield: Paul Pogba, Ngolo Kante and Philippe Coutinho.

The top three for The Best FIFA Men’s Player award are Cristiano Ronaldo, Lionel Messi and Neymar – who’s your pick for number one and why?

I would go for Ronaldo. All three are amazing players but in the last year Cristiano won La Liga, the Champions League again and finished top scorer for the fifth season. His ability to stay at the top year after year is very impressive.

The three candidates for the Mens’ Coach award are Massimiliano Allegri, Antonio Conte and Zinedine Zidane. If you were a player, which of the three would you want to be coached by and why?

I would love to play for Zidane. I really admired him as a player and he has made the transition to coach very well. He’s won five major trophies in five tournaments.

There’s an award for The Best FIFA Goalkeeper this year. Who do you think is the best keeper in the world at the moment and why?

Gianluigi Buffon. He’s almost 40 years old but very difficult to score against. Good goalkeepers give the players in front of them confidence and nobody would have a problem playing in front of Buffon. I met him recently at an event and he sent me a nice message when I retired.

The FIFA Puskás Award rewards the best goal of 2016/17. Which of the finalists would get your vote and why?

I’d vote for Oscarine Masuluke. For a goalkeeper to score an overhead kick in stoppage time like that is impressive.

Who would you choose between Deyna Castellanos, Carli Lloyd and Lieke Martens for the Women’s Player award and why?

My vote would go to Lieke Martens. She led Holland to that European Championship win and was Player of the Tournament.

What makes London such a special city, and what does it mean to you?

I’ve been coming to London every year for the past 15 years. It’s become like my second home as I normally base myself in the city during the track and field season. There are a lot of Jamaicans living in London and I always get great support when I race there.

As you can tell from the names of the awards, FIFA are looking to recognise ‘The Best’. From someone who has risen to the top of their profession – can you give some insight into what it takes to be the best, and the sacrifices it takes to get there?

It takes talent, discipline, dedication and hard work. I believe that everyone who is considered one of the best has worked extremely hard to get there. To be successful at the highest level there are sacrifices you have to make in terms of parties, friends and getting rest.

If you were to give advice to any young boy or girl who is determined to be the best in the world at their chosen sport, be that football, sprinting or another sport, what would it be?

Choose the right people to have around you and advise you, be determined, work hard, believe in yourself, success doesn’t always come overnight so be consistent and the results will come. I have a motto: ‘Anything is possible’.