Our Chances Of Survival Is Very Bright – Godwin Attram 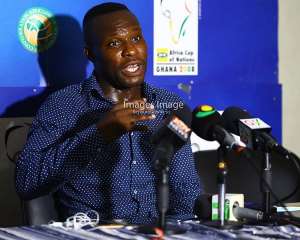 Head coach of Accra Great Olympics, Godwin Attram is adamant their chances of surviving in the Ghana Premier League is very bright after defeating Ashgold by a lone goal in the 29 fixtures of the GPL at the Accra Sports Stadium in Accra.

Ahead of their final game with Bechem United, Attram believes the match is one of destiny for them, as their survival would depend on how well they fight against the Bechem based club, which is also battling relegation but believes they have a chance of surviving in the top flight.

“I think the survival Great Olympics is very bright now. Looking at the league table and the permutations, you can see that our chances of survival are very bright and we hope that, it will come to reality.

“Olympics has suffered a lot so we need to survive and take advantage to solve all internal issues for the club to come regain its glory in Ghana Football,” he stated.

“Bechem United is having 38 points so they will come all out to play like Ashgold but we beat them.

“We have no excuse if we want to come out of the relegation. We have our destiny in our own hands.

“We have to do everything possible to win that game. We thank God that we are better than Inter Allies and other clubs in terms of head to head so 39 points will take us out from the relegation zone,” he stated.

Great Olympics are currently occupying the 15th position on the league table with 36th points.

The Wonder has won nine games, drawn nine and lose 11 and has accumulated 36 out of possible 87 points.