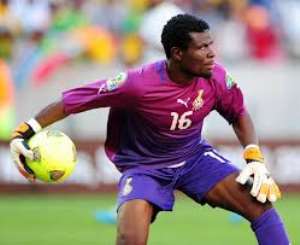 Despite being ignored by Coach Kwasi Appiah for Ghana's clash against Ethiopia in the 2019 qualifier, Enyimba shot stopper Fatau Dauda has thrown his weight behind the team to go for victory.

The in-form goalie was not called up for the game but his love for his motherland still reigns supreme as he has thrown his support behind the team to win.

In a video he tweeted, in which he was in a determined mood with the team during the 2017 AFCON in Gabon, Dauda wished the Black Stars the best of luck.

— lion 16 (@fataud1) June 11, 2017 As has been the tradition of the team, Dauda was leading their usual 'jama' session in a spirited atmosphere for the game.

Ghana will be taking on the Walia Antelopes of Ethiopia in the group opener of the 2019 AFC qualifier at the Baba Yara Sports Stadium in Kumasi on Sunday at exactly 15:00GMT